Story and Photos by Steve Houk When I got word that folk/world/roots music force-of-nature Rising Appalachia would be playing the Jefferson Theater in Charlottesville on New Year’s Eve, I thought, hey cool, maybe I don’t have to spend New Year’s Eve alone (my wife’s in Florida dealing with some extended family health issues) and could work out covering the show. Plus, this could be a really special thing. I mean, even more special than a normal RA show, which is saying a lot. So I put the wheels in motion, and set up the trip.

I’d been a fan of the band ever since I interviewed charismatic co-lead-sister Leah Song a few months back when the band released their excellent Wider Circles record, and was captivated not only by their brilliant and mesmerizing music and presentation, but their whole additional sincere vibe of activism and a sense of real community with the people they play for. So speaking with Leah a week or two before the New Year’s Eve gig, you could sense a palpable air of anticipation and excitement for this show, which would be the band’s first-ever New Year’s Eve gig. “We’ve never done a show on New Year’s Eve,” Leah told me. “We’ve always kind of kept to ourselves. But it’s a beautiful theater, and it is kind of central to so many of our friends and family. We thought it’d be a good place to try it out.”

And a really special night it was, in many ways, for band and packed house alike.

Beginning with an intimate pre-show party at local Charlottesville music venue The Southern for people who dropped some extra coin on VIP tickets, you could tell from the get-go that this was going to be a unique experience for Rising Appalachia. Coming off an exhausting, exhilarating year where they saw their fan base grow exponentially, the band was looking forward to a few weeks of rest before heading back out on the road, so New Year’s Eve was a perfect way to send an incredible year packing, and ring in a new one full of promise and possibility, all before hibernation begins. And to start the evening off like they did provided a great way for the four core members of the band – Song, sister Chloe Smith, guitarist/bassist David Brown and percussionist Biko Casini – to touch and feel their core audience before the hullabaloo of the main event. Before mingling with fans, the band even played a short, playful set in the venue’s music hall, which concluded with a spontaneous and endearing waltz between Song and her sister. 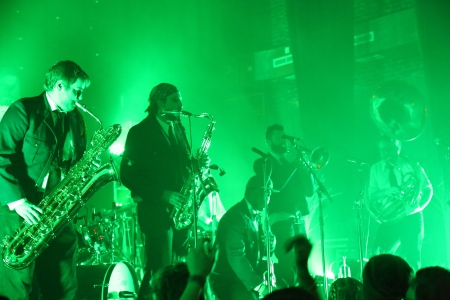 “The intimacy of our ‘speakeasy VIP session’ was a real treat,” Song told me a few days after the NYE show. “Simultaneously mysterious, acoustic and personal, it is a rare treat that we get to be so playful and unrehearsed with a live audience, let alone so close up with everyone. It felt like a really special synergy between our crew and the audience there to share with us.”

After making the rounds and genuinely seeming to enjoy the interaction with their fans, the band ambled over to the Jefferson to prep for their set, and around 8, the evening began with longtime band friend Theresa Davis, who calls herself an “Educator/Author/Poet/Artist/Pirate” serving as host and in-between-sets entertainment with her powerful edgy poetry about everything from reproductive rights (“Stay AWAY from MY vagina!”) to the poignancy and humor of her son’s first forays into love. Davis was well-suited to this role, providing laughs and thought-provoking ruminations as gear was swapped out and bands got ready for their sets.

First up was Fredericksburg’s wildly energetic brass ensemble Elby Brass Quintet, who romped through a short set of boistrous tunes that blended a traditional brass band feel with a contemporary flair. Ending with a raucous cover of Eurythmics’ “Sweet Dreams (Are Made Of This)” Elby Brass got the party started, all as the hundreds in attendance began to file in. After another provocative poetry slam by Davis, Birds of Chicago was up next and led by husband and wife JT Nero and Allison Russell provided a great set of well-crafted singer/songwriteresque songs and talented playing. It was the popular Chicago band’s first gig in Charlottesville, and judging by the general response, they will certainly return. Next up to get the proper vibe really going in Rising Appalachia’s direction was exceptional Burkina Faso musician Arouna Diarra, who started RA’s recent tour as a warmup act and has since become a contributor during RA’s main sets. Accompanied by RA’s Casini on percussion, Diarra set the mood perfectly with an exquisite handling of a variety of indigenous instruments native to his homeland. 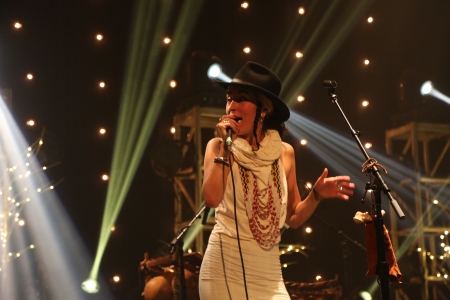 Around 11 p.m., Leah, Chloe and David bounded on stage to join Biko and Arouna, and Rising Appalachia had finally and gloriously arrived for their maiden New Year’s Eve voyage. And a wondrous journey it was, as the band fed off the electric and anticipatory ambience in the packed theater, and amidst a stunning new lighting motif and assorted musicians and characters joining them here and there onstage, played an enthusiastic and dynamic set of enthralling music from their impressive songbook of music that combined hill country folk with world music rhythms and also a sound all their own. The mood onstage seemed buoyant and lively as the four core members of this unique and memorable band worked in sync and played their hearts out throughout their set. “We were all really pleased with the flow of the evening, ” Song continued. “All of the artists over the night helped create such a laid-back but celebratory vibe, so the stage felt well seasoned once we stepped to it. And the lighting was absolutely brilliant, and catered so well to our sound.”

As midnight approached and champagne was poured in anticipation of ushering in 2016, I teetered on the fence between journalist and fan as I had all night, and then gave in, dancing amidst the throngs as the band counted down from “10” until the clock struck 12 (or thereabouts) when an avalanche of silver balloons and confetti covered the crowd as the band rang through the thoroughly appropriate new beginning strains of “Wider Circles”which calls out for expanding your horizons, your own “circle.” Joining them on stage as the popping of said balloons and New Year’s revelry exploded were three large puppet-headed dancers and other performers, making this particular stroke of a New Year’s midnight quite different from any I’d ever experienced. 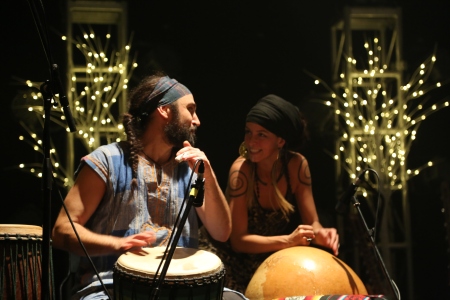 “We had a blast figuring out how to fit a countdown organically into our set,” Song said with a characteristic sparkle. “We called it ‘an analog countdown’ and apparently we were actually only about 3 seconds off!  So, I would say across the board it was a joy to bring in the New Years steeped in our own artistic pursuits. We look forward to that being a blueprint for many years to come!”

So the evening started and finished without a date, but amidst the throngs at the Jefferson, I was certainly not alone, especially as far as the infusion into my heart and soul of the incredible enriching experience that is Rising Appalachia and Friends. Get some rest, band…you’re gonna need it.

Hotel Watch: Putting on the Ritz