written by WL Author March 18, 2019
By Steve Houk / livingonmusic.com One of rock’s most respected musicians keeps finding bliss amongst his many collaborations. If there was ever a rock star basking in a musical heaven-on-earth right now, it’s got to be Luther Dickinson. The renowned blues-Americana-rock guitarist/singer/songwriting maven has pretty much got it all going on right now. Why? Let him tell you. “You caught me in a great moment, Steve,” the always affable and engaging Dickinson told me. “So I just set up my ‘office’ here in the garage of Levon Helm‘s barn, right underneath the Barn studio, and I’m here studying Grateful Dead music for a sold out gig I’m playing with Phil Lesh tomorrow at the Capitol Theater, I need to be on my game! And oh yeah, I’m playing with (Levon’s daughter) Amy Helm and Birds of Chicago tonight up in Levon’s Barn. Man, I’m just lovin’ sitting here, in the breeze in Woodstock, the sun shining. I’m livin’ the dream, man.” Yeah, not a bad life for good ol’ Luther at the moment. Nor has it been bad to date, what with his own superb band, the Grammy-nominated North Mississippi All Stars, still going strong, a custom Gibson signature model guitar, the Luther Dickinson ES-335, issued in 2014 just for him, and also a past stint with the Black Crowes and numerous stellar collaborations on his deep rock and roll resume. In addition to the recent ask to play alongside the still vital Grateful Dead bassist the day after his 79th birthday – a gig Dickinson’s done before with Lesh’s Terrapin Crossroads and Phil and Friends incarnations – he is also smack dab in the middle of an exciting and unique current project, Solstice: Luther Dickinson and Sisters of The Strawberry Moon, a collaboration with some of today’s brightest singers and songwriters like Helm, Birds of Chicago, Lillie Mae, Amy LaVere and Sharde Thomas. Helm and Birds Of Chicago will join Dickinson at the Capitol with Lesh, and the ensemble will also play DC’s City Winery main stage on Wednesday March 20th. 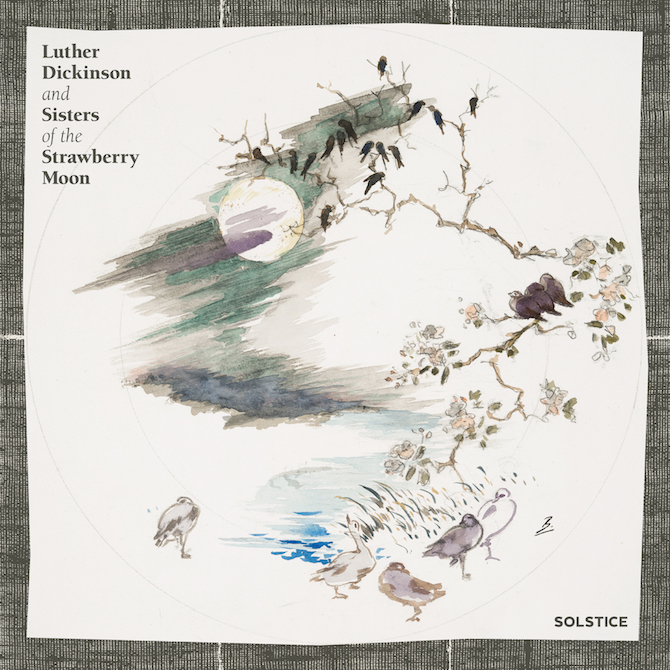 With sonic echoes of Emmylou Harris, Allison Krauss, Puss In Boots and even early Dolly Parton wafting gorgeously amidst Dickinson’s sparkling lilting guitar and other acoustically powerful instruments, Strawberry Moon is a different sounding project for a longtime collaborator like Dickinson, but it is certainly one that he is, well…over the Strawberry Moon about. “It really is a joy,” gushed Dickinson. “The way it came about was, in my mind, when you make new friends of musicians, I am always trying to dream up new creations. Birds of Chicago and I played a show together, I love them so much, and I realized they knew Amy Helm. And I’ve seen Amy and Sharde through the years. So I was like, we have enough new songs to throw another party, you know? So we literally just threw a party, we found two days where we could all get together and everybody brought a couple of tunes and that’s it, man. I mean that (Sisters) record, except for the harmony and vocals, that was first and second takes, and some of it is the first rundown. It went so intensely on the rundown that we had things work in the initial moment, you know?” 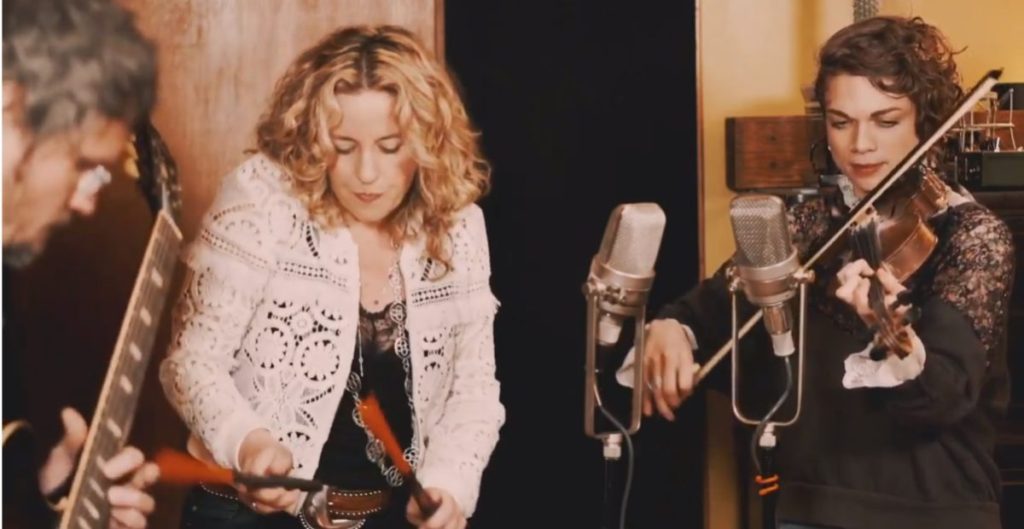 Luther Dickinson, Amy Helm and Lillie Mae during filming of the video for “Like A Songbird Has Fallen”

Even though he certainly contributed musically, Dickinson took on the producer role on this project, helping shape the feel while letting the gifted musicians express their own sounds and styles. “As far as producing it goes, all I did was I got the artists together and then I allowed them to make their own decisions and sort everything out. Sometimes you have to be heavy handed and make all the decisions, but with The Sisters of Strawberry Moon, I let them sort it out for themselves,” Dickinson said. “The main thing is to create the environment where they could just think for themselves. I say this album is the artifact of our friendship.” 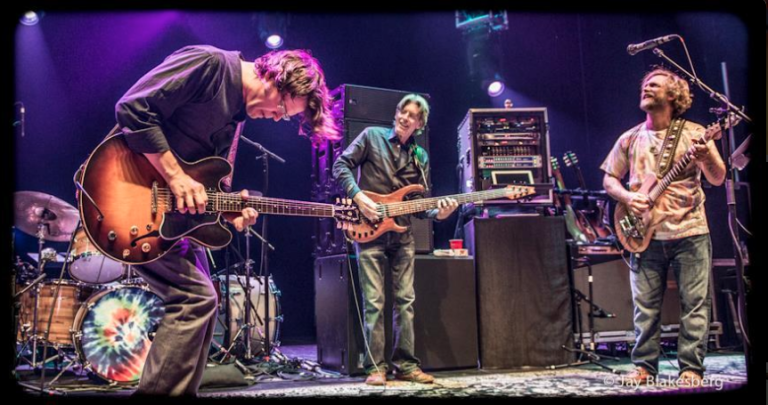 As for the recurring onstage collaboration with Lesh, Dickinson reveres and respects the Dead bassist for his generous ability to welcome new musicians in and teach them his music. It also helps Dickinson relish many of his own partnerships. “What a gentleman,” Dickinson said of Lesh. “He would invite us, that’s what he does, he hires musicians from outside his world to come to his gigs and play his music and interpret it in their own way. And he has the patience to teach it to musicians time and time again. Can you imagine? He hires them to come to his place, and then takes the time to teach the music to them. I mean you are supposed to do your homework, but there’s always a ‘philosophy’ behind the odd timing or a melody, or a harmony or a chord change, so there’s always something that he’s going to end up teaching you. He’s a wonderful, wonderful teacher. What a hero, man, he’s my hero.” 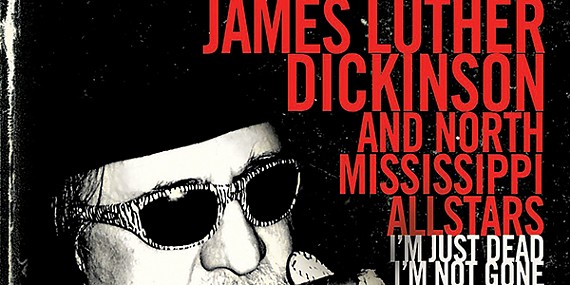 Amidst the potpourri of past and current collaborations, including an ongoing one with his brother Cody Dickinson and the NMAS, Luther has one in particular that he will always treasure the most for its unending influence. Working with his late father, Jim Dickinson who passed in 2009, sustains and reinvigorates the 46 year-old Luther every day he plays music. Jim Dickinson was a legendary collaborator with a musical resume that speaks for itself, including producing Big Star and The Replacements among others, playing piano on the Rolling Stones‘ “Wild Horses,” guitar on Bob Dylan’s Time Out Of Mind record, several albums with Ry Cooder and so much more. “Oh yeah, he’s there every day. Songwriting and making records is definitely like a communion to our dad, every time I do the things that he trained me to do. A song is like the initial blast for me, an initial blast of expression. And then you go back and you edit, and you tighten,” Dickinson said. “He taught me so much about the craft. And when I go back after the initial creative blast, I go back with that craft. That’s the real collaborative communion. It’s like, he taught me to do it, and I still do it. It’s like we are doing it together.” For Luther Dickinson, life is good. He is able to write, play and record his own music, which always seems to have at its core that raw, real, indigenously bluesy feel, while also jumping into dynamic and exciting musical alliances that expand his horizons. Not a bad gig for a kid from Mississippi blues country. Not bad at all. “Music to me is improved when you collaborate, man. Also, I play differently with each group of musicians I find myself with. Overall, I am just reactionary. I put myself in new situations, to see what happens.” Luther Dickinson, Amy Helm and Birds Of Chicago perform ‘Sisters Of The Strawberry Moon’ on Wednesday March 20th at City Winery, 1350 Okie St NE, Washington DC, 20002. For tickets, click here.
Amy HelmJim DickinsonLevon HelmLuther DickinsonPhil LeshSteve Houk
FacebookTwitterPinterestWhatsappEmail