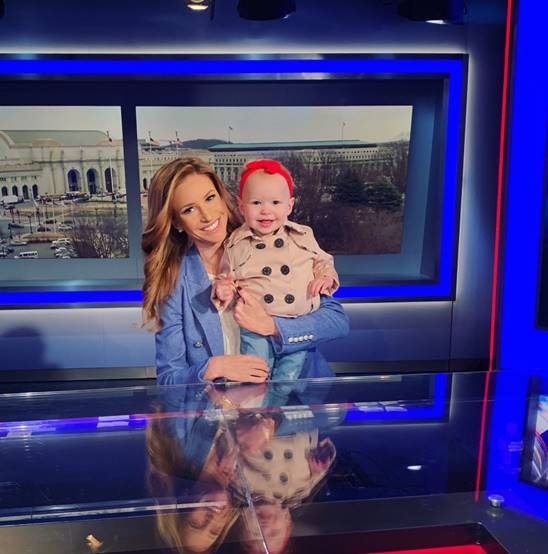 Kristin was nearly the same age as her daughter when her mother, Dr. Anna Lee Fisher, journeyed to space. 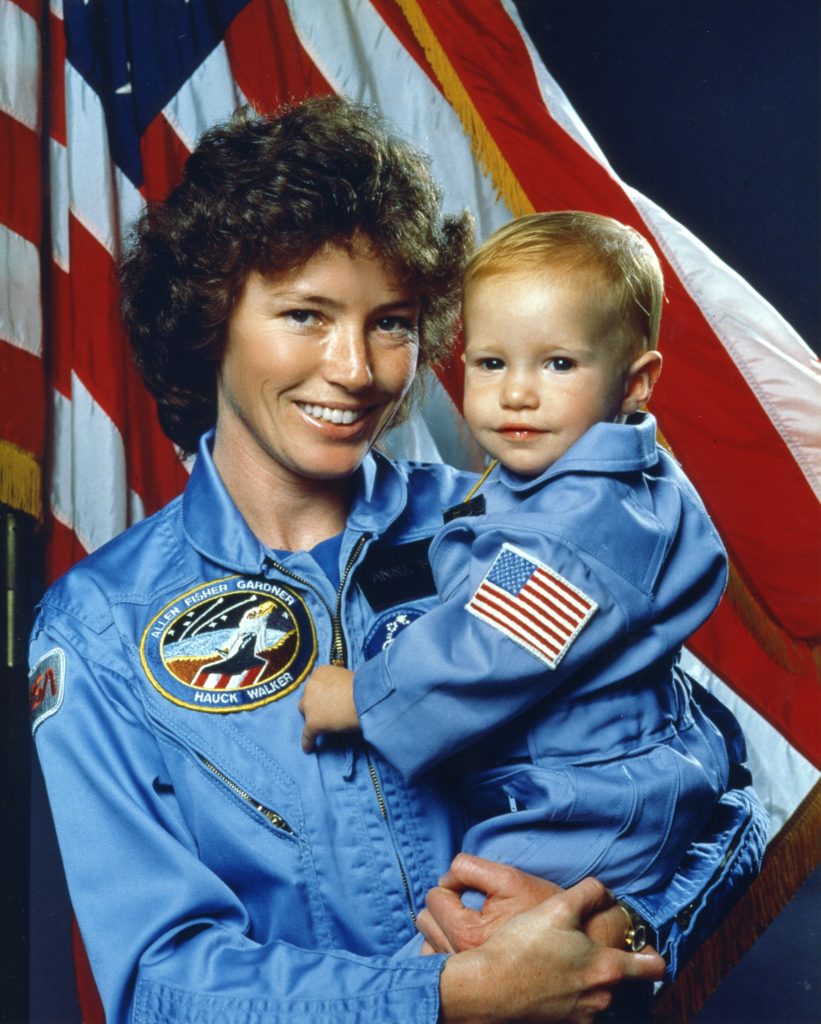 The advice Kristin received from her mother: "Don’t feel guilty about being a working mom," "think about the example you are setting for your daughter," and "time away doing something you love will make you a better, more present parent when you are home." 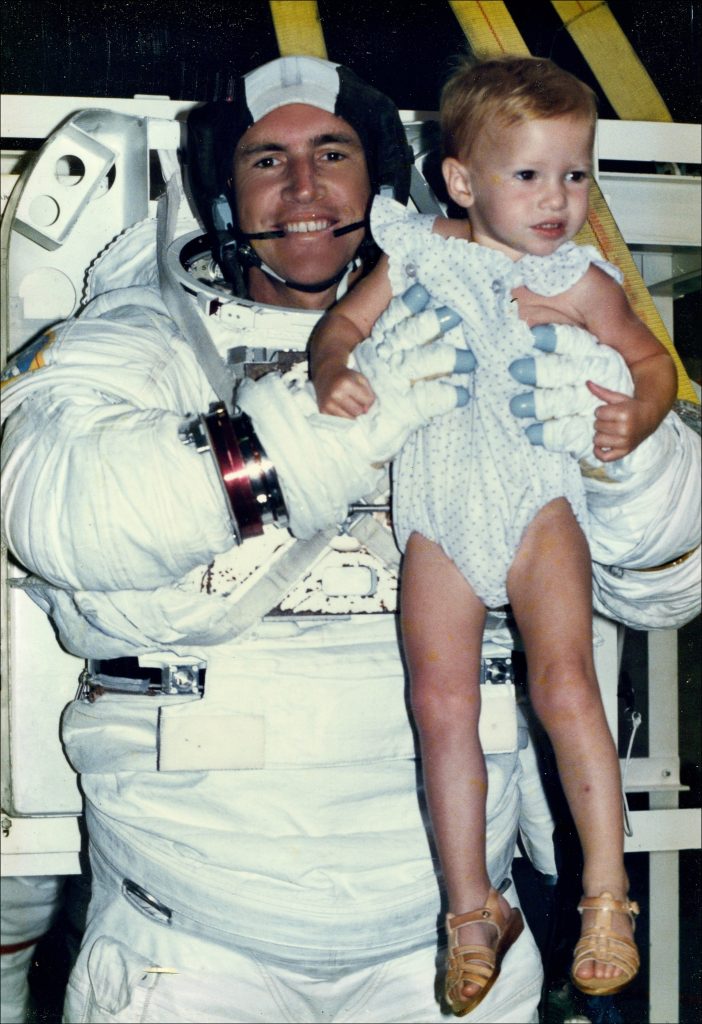 Fisher went into space in 1985 on board the Space Shuttle. His time at NASA coincided with that of his former wife, Kristin's mother and fellow astronaut Dr. Anna Lee Fisher 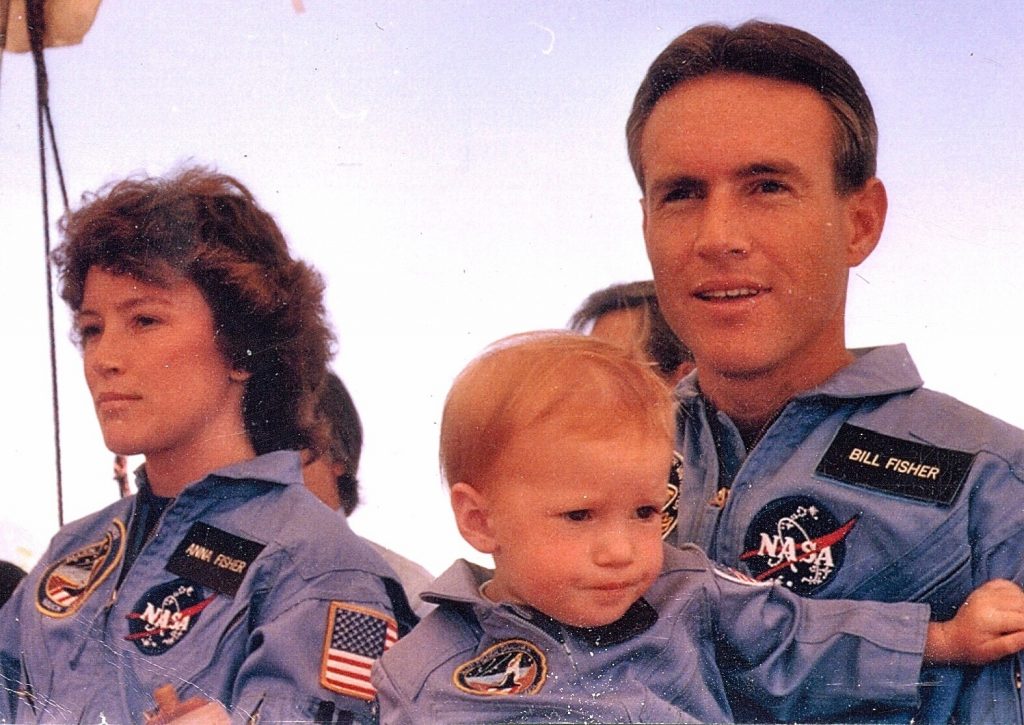 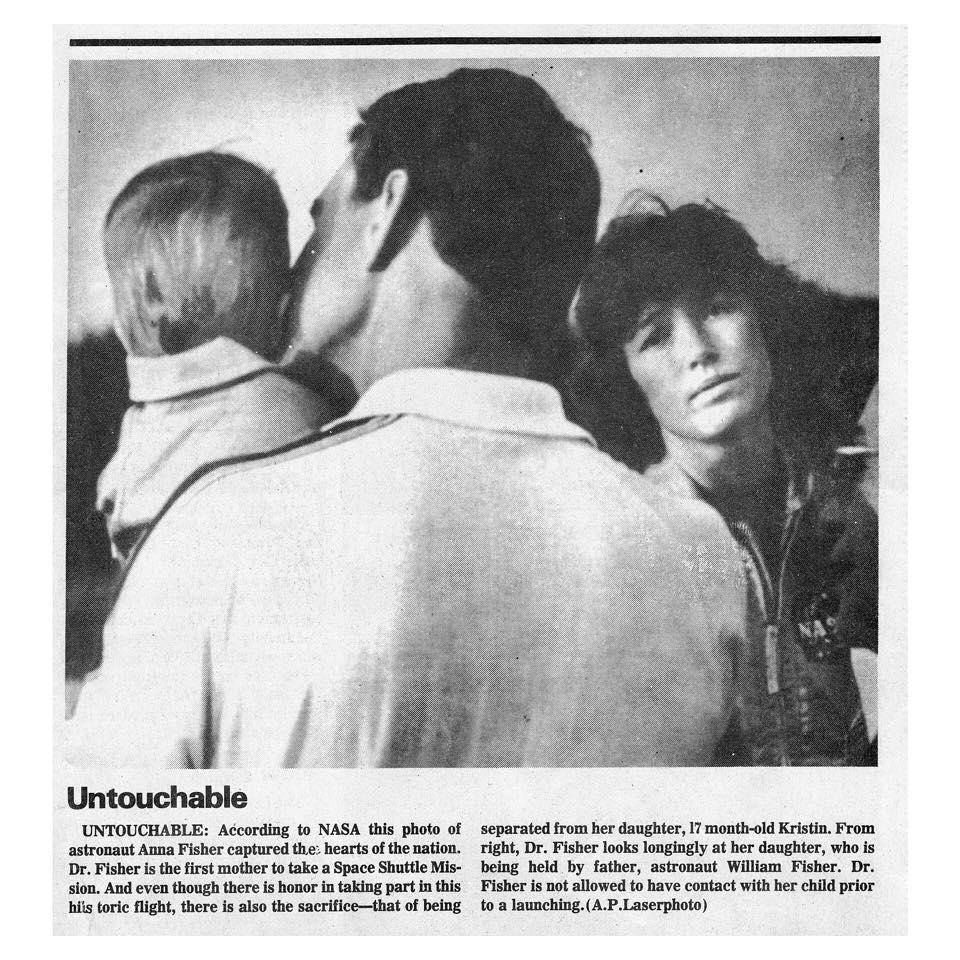 A news clipping showing her father, astronaut William Fisher, holding Kristin as a toddler just before her mother took the historic NASA flight. Dr. Fisher wasn’t allowed to have contact with her child prior to the launch. 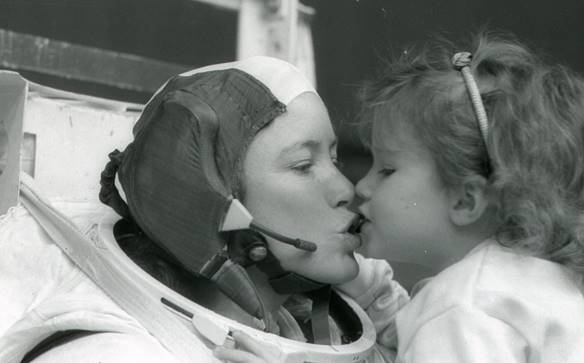 Dr. Anna Lee Fisher journeyed to space in 1984 as a member of NASA’s Space Shuttle Discovery flight on mission STS-51A.

“My parents are astronauts … what do your parents do?”  One can only imagine the playground conversations when pugnaciously touting being the daughter of “The First Mom in Space.”  Kristin Fisher, Fox News Channel’s Washington-based correspondent, was only 14-months old when her mother, Dr. Anna Lee Fisher, journeyed to space in 1984 as a member of NASA’s Space Shuttle Discovery flight on mission STS-51A. Her father, astronaut William Fisher, held Kristin as a toddler just before her mother took the historic flight, as Dr. Fisher wasn’t allowed to have contact with her child prior to the launch.

Now as Kristin is a mom to 18-month old daughter Clara, and understands the importance of pursuing your passions while also setting an example as a working mom, she takes on the role of Fox News Channel’s face of special programming surrounding the 50th anniversary of Apollo 11. Broadcasting live from The Kennedy Space Center, Kristin, a self-proclaimed “space-nerd,” will present interviews with Chief Flight Director for Apollo 11 Gene Kranz and NASA administrator Jim Bridenstine.  She will also be interviewing— who else? — her parents.

We caught up with Kristin to ask about lessons growing up in an astronaut household and the importance today of the Apollo 11 mission.

Washington Life:  What was it like growing up in an astronaut family?

Kristin Fisher: I grew up with this profound sense that if you dream big enough and work hard enough, then you can truly be whomever you want to be and do whatever you want to do.  My father first applied to be an astronaut when he was 12 years old (and he later flew that rejection letter into space).  He was rejected again in 1978, the same year his wife, my mom, was accepted.  So he went back to school to obtain an engineering degree, while simultaneously working full time as an emergency room physician, and only then was he selected to become an astronaut.  That relentless refusal to give up on your dreams really stuck with me, and pushed me to do the same.

WL:  Explain yourself as a self-described “space-nerd”

KF: I’m just a massive fan of the entire industry — NASA, SpaceX, Blue Origin — all of it.  I get goosebumps during countdowns.  Tears in my eyes at liftoff.  I think rocket launches can be a religious experience.  I push to report on space as much as possible.  And the older I get, the more responsibility I feel to do my small part to inspire the next generation of space explorers.

WL:  Who are your space heroes (other than your parents, of course)?

KF: Astronauts get all the attention.  But they owe their lives to people like Gene Kranz, NASA’s flight director for Apollo 11’s lunar landing and Apollo 13’s harrowing flight home.  I had the honor of interviewing Kranz last week and I asked him, “Back in 1979, would you have believed it if someone had told you that 50 years from now, no humans will have explored beyond where Apollo astronauts had gone?”  He said no, and got a little misty eyed.  As we mark this anniversary, I think it’s important to remember that we owe it to people like Kranz to pick up where they left off.

WL:  What does the Apollo 11 anniversary mean to you?

KF: I find myself nostalgic for a time that I wasn’t alive for — a time when boundaries between countries momentarily evaporated and we came together as a species to celebrate one of humanity’s greatest accomplishments.  More than 600 million people watched the Eagle land on the moon.  At the time, my father was living in a small village in Switzerland, and he remembers the villagers running into the streets with torches chanting, “Sur la lune! Sur la lune! (On the moon!)”  Half a century later, I find myself longing for a similar globally unifying moment in my lifetime.

WL:  What are you looking forward to this weekend in covering the anniversary for Fox?

KF: We’re going to be broadcasting from inside the room where Neil Armstrong, Buzz Aldrin, and Michael Collins suited up before heading out to the launch pad.  So I’m looking forward to absorbing the history of the space, sharing it with our viewers, and getting them excited about this next chapter in human space exploration.

WL:  What does the public today need to know/remember/appreciate about the Apollo mission?

KF: How close the mission came to being aborted in the final minutes before landing on the moon.  Emergency alarms were flashing and the Eagle was seconds away from running out of fuel.  But thanks to nerves of steel in the cockpit and in Mission Control, where a 26-year-old engineer made the gutsy call to the ignore the alarms, Neil Armstrong was able to manually land the Eagle on the moon.

WL:  What do you think of a mission of returning to the moon or going to Mars?

KF: I don’t think the destination is as important as simply selecting a target and sticking to it.  For the last 20 years, the destination has changed every time a new president takes office.  NASA needs a mission that can survive multiple administrations, and enough money from Congress to pull it off.

I get goosebumps during countdowns.  Tears in my eyes at liftoff.  I think rocket launches can be a religious experience.

WL: What do you want your daughter to know about the Apollo 11 mission and your grandparents’ legacy?

KF: Some things in life are worth the risk.  It’s easy to forget how dangerous the Apollo 11 mission was.  There was a very real chance that those astronauts might not make it back to Earth.  My parents too.  My Mom was about six weeks away from her second spaceflight when the Challenger accident happened, and one of the solid rocket boosters’ seals on my Dad’s flight almost burned through (a more extreme case is what caused Challenger to explode).  My parents knew the risks.  It’s why they made upwards of 30 hours of home videos in the months leading up to their launch – so I would have something to remember them by in case they didn’t come back.  I’m endlessly relieved that they did, but I would have understood why they left me on Earth if they did not.

WL:  If your mother was the “The First Mom in Space” — what label would you give yourself?

All That Jazz: Snarky Puppy