Ultra wealthy guests get what they pay for — luxury, location, service and style — at one of the British capital’s landmark hotels. Many of the 141 rooms and 40 suites on 11 floors (some with private terraces) have views of nearby Hyde Park and its famed Serpentine. The hotel’s front entrance is just across the street from two of London’s top department stores, Harvey Nichols and Harrod’s, and is adjacent to the Knightsbridge Underground Station on the Piccadilly Line. British Royals are frequent guests with most of the Windsor family spotted at the grand fete hosted by Queen Elizabeth II on the eve of Prince William’s wedding in 2011. Other notable guests include Chinese President Xi Jinping, fashion designer Christian Louboutin and entertainment stars Rihanna, Liam Neeson, Dame Helen Mirren, Taylor Swift and Morgan Freeman. The hotel reports that Intercontinental Europeans (including the U.K.) make up the largest percentage of guests, followed by the U.S. the Middle East and Asia. Classic English style decor (i.e. heavy curtains, plush pillows and imposing furniture) has given way to a sleek, light touch with blond wood and pale and transparent shades predominating, especially in Wang’s preference for clear acrylics with metal. Art Deco touches can be spotted in the closets and etched glass bed tables. Beds are wonderfully comfortable with the expected high-thread-count linens. (Despite several requests, it proved impossible for the staff to understand a request to place a top sheet under the heavy duvet.) Other features include a desk and chair, plush seating, a 40-inch smart TV and free Wi-Fi, a safe, mini-bar, international electrical plugs and ample closet and drawer space for storage. The pearly white marble bathrooms boast deep soaking tubs, separate walk-in showers and heated Japanese toilets with adjacent hoses taking the place of bidets and soft snowy linens. Premium Miller Harris toiletries and Jo Hansford hair products are generously sized and replenished twice daily. The capacious subterranean spa boasts a large (56-feet) stainless steel lap pool surrounded by comfortable chaises longues. As promised, it was an “oasis of calm” the three times I visited with only a few guests spotted.  Offerings include a fully-equipped fitness center; sauna and steam rooms; numerous massage choices; pilates and yoga training in a custom-designed studio; and traditional Chinese medicine therapies, Bastien Gonzales specialty manicures and pedicures and anti-aging Nescens facials. The 13 treatment rooms include the ultra luxurious Oriental Suite featuring twin massage beds and a Rasul water temple with heat, mud and steam conditioning options. Note that private memberships are available.

Staff have a phenomenal ability to recognize guests by name time after the first encounter and seem anxious to fulfill any request. The concierges were especially adept in recommending restaurants, shops and tourist attractions and were invaluable in deciphering the complexities of the British Rail systems. The hotel thoughtfully provides two S-Class Mercedes-Benz sedans that are available at no charge to guests for one-mile-maximum jaunts in central London on a first-come, first-served basis. (Do note that a generous gratuity is de rigueur.) 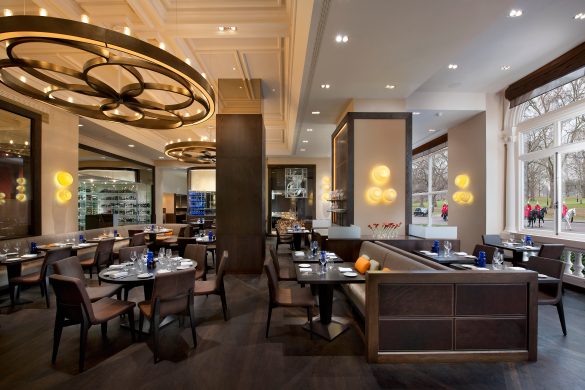 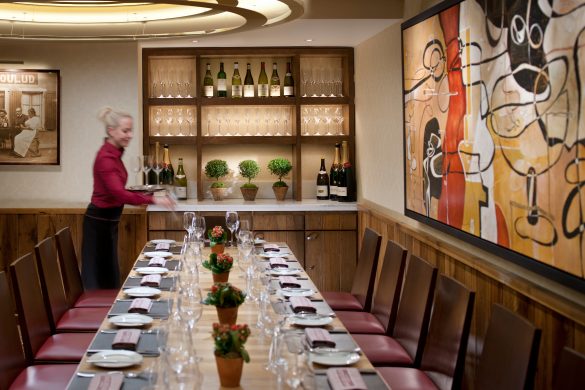 Bar Boulud’s casual but upscale fare, served in an unpretentious open kitchen setting in the hotel’s basement, features a large and wide-ranging menu running the gamut from what has been called “the best hamburger in town” to seasonal French bistro fare served informally on zinc-topped tables as guests settle in to plush red banquettes. Terrines, foie gras and escargots are recommended along with a hearty French onion soup and other plats classiques that include quenelles (pike fish), chevreuil (roast venison), pintade (guinea hen) and the inevitable steak frites. In the summer it is also possible to dine outside on the restaurant’s Terrace overlooking Hyde Park.

Breakfast, served in Dinner, recently experienced a hefty price hike, and now ranges from $45 for the continental version to $110 but is included for those staying in the hotel (except for the top caviar and champagne options). The morning repast features fresh juices and fruits, hot and cold cereals, pastries and rolls, smoked Scottish salmon, eggs cooked in a variety of ways, salads and cold meats and cheeses. Japanese and Chinese menus are also available for those wishing to partake of Miso soup, pickled vegetables, dried seaweed, tofu, dim sum and fried pork or chicken noodles.

From $840 (including 20 percent V.A.T.) with full English breakfast included.