In 2007, then-Russian Ambassador Yuri Ushakov and his wife Svetlana showed us around their weekend escape on the Eastern Shore. This Russian-owned three story Georgian style house on 45 acres along the Chester River in Centreville, Maryland was closed by the Obama administration on Thursday, December 29, 2016 in retaliation for Russian interference in the 2016 presidential election.

Editor’s Note: In light of President Obama’s December 29 decision to expel Russian diplomats from the U.S.  as well as shut down Russian-owned compounds in the New York and on the Eastern Shore of Maryland, we are reposting an “Inside Homes” story from the the Summer 2007 in which we featured the Eastern Shore property and then-Ambassador Yuri Ushakov. 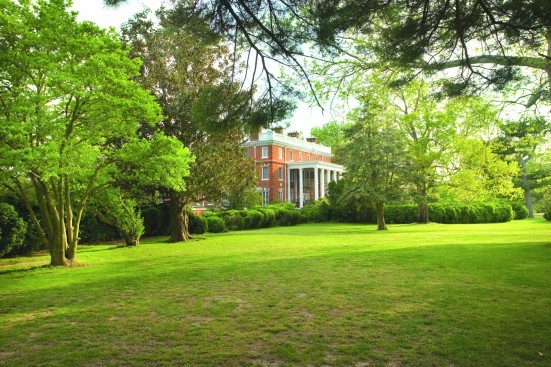 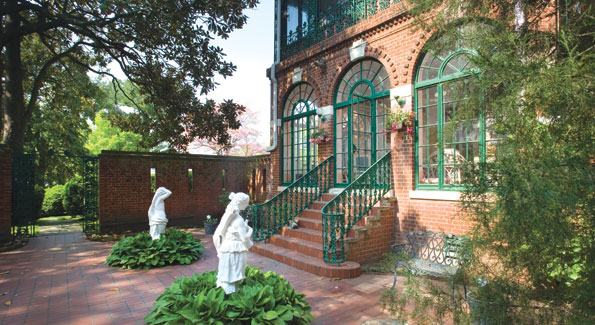 Wrought ironwork accents the brick facade fronting the side courtyard off the enclosed living room porch. 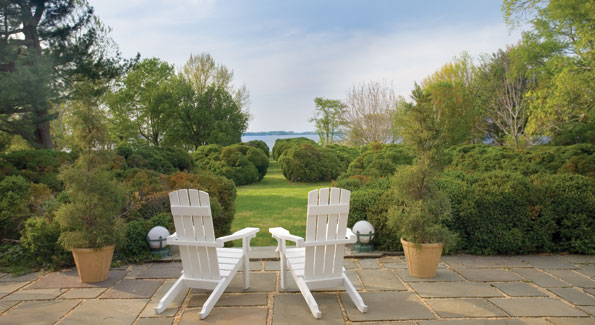 From the rear flagstone patio, a view of the Chester River beckons through clustered boxwoods. 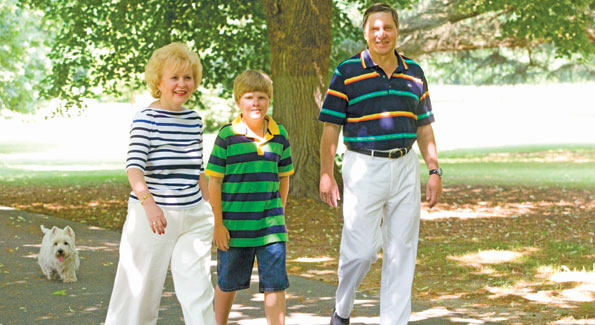 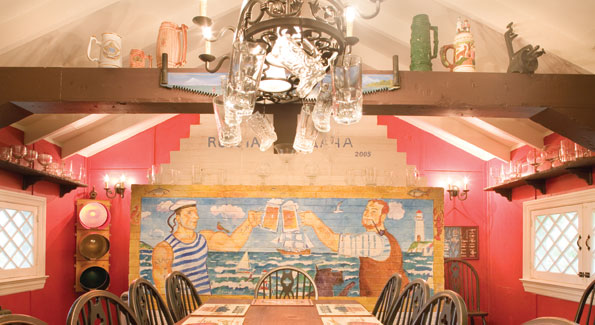 A painted mural of toasting Russian and American sailors decorates the rear wall of the rustic hunting lodge, a former outbuilding converted by the ambassador and his wife for entertaining. 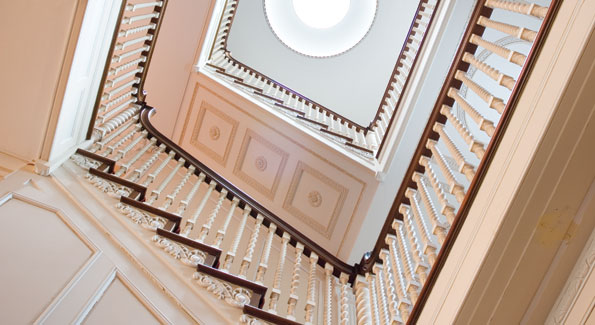 A round skylight illuminates the grand staircase leading to upper-floor bedroom suites. 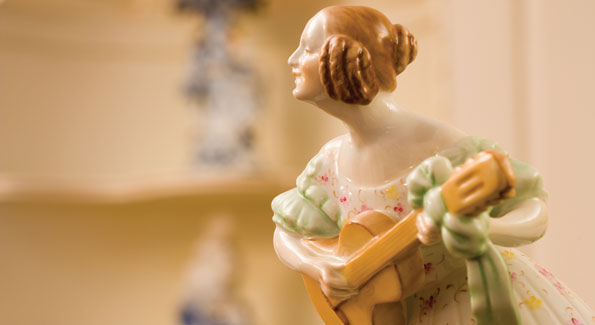 A dainty figurine represents the home's impressive collection of German and Hungarian porcelains.

Russians cherish the dacha, a word meaning summer house or cottage. During summers and weekends, millions of them leave the stress of congested city life for the solace of a cabin or house in the countryside. “It’s a Russian tradition,” explains Yuri Ushakov, Ambassador of the Russian Federation. “You will find Moscow empty on Saturdays and Sundays, even in winter. A dacha is a good place to spend time outdoors with family and friends.”

Since arriving in Washington eight years ago, the Russian ambassador and his wife Svetlana Ushakova have kept up this tradition on Maryland’s Eastern Shore. They spend nearly every weekend and longer stretches during the summer at the embassy’s three-story brick dacha fronting the Chester River. While the 1920s Georgian-style house doesn’t exactly look Russian, it offers the couple the same pleasures as their dacha outside of Moscow – spending time with their 10-year-old grandson Misha, grilling shashlik (Russian shish kebob), with friends, or relaxing in the bania, Russian for steam room.

“Because we have such a hectic life in Washington, we need a place to hide for awhile,” says Ushakova on a recent tour of the dacha, accompanied by Simon, her west highland white terrier. “This is the best spot for really being alone with your family. Of course, we entertain friends, colleagues and officials here but not as much as we do in the city. We prefer to host small gatherings where you can really talk, exchange opinions and enjoy each other’s company.”

Strolling the grounds of this park-like setting, lushly planted with magnolias, cypress and boxwood, it’s easy to understand why these diplomats treasure their getaway. It is located right on the waterfront with all the amenities of a resort. Within a short walk from the main house are a swimming pool and a cabana, a tennis court and a waterfront dock. While the 57-year-old ambassador’s wife likes the seclusion of the pool near the river, her husband, a fit 60-year-old, prefers swatting balls on the tennis court, boating on the river or cycling around the grounds with his grandson in tow. The couple can also be found browsing the antique shops in nearby Centreville, Chestertown and Easton, looking for the porcelains that Ushakova collects or the old books treasured by Ushakov, who also collects red wine.

Some of the finds from those trips, along with a phone from a Soviet submarine, adorn the one-room “hunting lodge” where the couple hosts special visitors. “No one really hunts but that’s what we call it,” says Ushakova with a laugh. This shingled shed with its outdoor fireplace, one of many outbuildings on the property, is tucked off the tree-lined lane leading to the house. Inside, a long wooden table under timber ceiling beams and glass beer steins hanging from a rack create the feeling of a rustic pub. A colorful mural of Russian and American sailors clinking their beer glasses decorates the back wall; the Russian wears a naval hat inscribed with “Ushakov.”

The lodge is one of several recent renovations to the sprawling estate once known as Pioneer Point Farm. The current 45 acres originally belonged to a 700-acre land grant from Britain in the 1600s. In 1702, the farm was purchased by Richard Tilghman and remained in his family until 1925 when it was sold to John J. Raskob, an executive with Dupont and General Motors. Tombstones dating from the early 1800s still remain on the property, but the first wood-framed dwelling on the estate is long gone. Raskob built the current brick mansion where the front door knocker, inscribed with “Hartefield House,” bears the only witness to that original home. For his 13 children and their friends, he also constructed an equally grand, neighboring brick house, which is now being restored by the Russian government.

After Raskob died, the estate was sold to a succession of owners in the decades following World War II. The Soviet government purchased the two houses and surrounding land in 1972 and later obtained more acreage after a land swap with the State Department, which in return received property in Moscow. The deal, however, wasn’t initially well received by the locals who were worried about suspicious foreigners. “It was during the Cold War and people around here were afraid that the Russians would bring their battleships,” says Ushakova. “But then they realized that it wasn’t so bad because Russians started coming to the local shops to buy food and everything. They realized that there was no danger and saw that we took care of the house and property. Moreover, they realized that the Russians were friendly and hospitable.”

For more than two decades, the Eastern Shore property served as a dacha for Anatoly Dobrynin who was the Soviet ambassador during the Kennedy, Johnson, Nixon, Ford, Carter and Reagan administrations until returning to Moscow in 1986. Dobrynin preserved the Flemish-bond red brick and ornate painted ironwork of the Raskob mansion and kept many of the furnishings that came with the house. Fourteen rental cottages, some built in Finland and shipped to the site, were added for embassy staff.

Much of the original flavor of the house remains intact. The formal living and dining rooms flanking the wide center hall still maintain their teak floors, oriental carpets and impressive crystal chandeliers. An archway on one side of the living room leads to the walnut-paneled library where built-in shelves hold many of the ambassador’s favorite books. Off the other side, a glass-enclosed porch overlooks a brick-walled courtyard where a fountain quietly gurgles. A two-story screened porch, set behind the rear colonnade of the house, provides a river view between nearly century-old boxwoods.

Upstairs, reached by a grand, sky-lit stairway, the second floor is reserved for family. The master suite with its own porch and sitting room adjoins a bedroom reserved for grandson Misha, who is currently attending Russian and British schools in Washington, and his mom, the couple’s 33-year-old daughter, Tatiana. On the third floor, four guest suites are fitted with small kitchens and some of the home’s 13 fireplaces. They share a lounge where Gothic-style wooden doors and wall paneling, and a niche for an altar, now adorned with a Russian icon, still testify to the room’s original use as the Raskob family chapel.

Though the big house remains largely unchanged since the Dobrynin days, its current occupants have added comfortable furniture reflective of their more laid-back style. Many of the spaces feature still life and landscape paintings by Russian artists and decorative Russian touches, including a samovar and porcelain figurines. True dacha living is best represented in the basement where recent upgrades have turned storage spaces into recreation rooms for playing table tennis, shooting pool and watching movies; the now stationary elevator may be turned into a bar. Down the hall is a lounge, where the ambassador and his buddies can share a glass of his favorite red wine after taking a sauna next door. “The steam of bania is the gift of God,” a sign over the doorway to the steam room proclaims in Russian.

As an offshoot of the embassy, the dacha is frequently used for official functions. Every May, the entire staff is invited to celebrate Victory Day, a Russian holiday commemorating World War II, and on Labor Day, the Sailing Club of the Chesapeake arrives to enjoy an annual fete. “The main mission for us has been to keep the house and grounds alive,” says Ushakov.On weekends, the couple prefers hosting smaller gatherings and house parties of no more than 10 people. Menus include fish freshly caught from the Chesapeake and salads tossed with lettuces, cucumbers and tomatoes picked from the vegetable gardens on the property. “People can relax and open up in way that they never do in the city,” says Ushakova. “A dacha is not just about entertaining. It’s about uniting people in a very spiritual way because here you are in harmony with nature. That’s why the dacha is so powerful for Russians.”

This story was originally published in the Summer 2007 issue of Washington Life Magazine.