The Jayhawks (photo by Sam Erickson)

I mean, who wouldn’t be? The stellar band he has spent years and years nurturing and growing is still largely intact, still recording, still touring and playing to sold out audiences, and Louris himself has overcome some personal challenges and in some ways has come through it all even better than before. Three-plus decades into this musical adventure, life is good, and this head Jayhawk is flying high.

“I’m sitting here in a nice place out in the country, here with the dogs. I have a wonderful woman, and things are good,” said Louris, who is in the middle of a fall tour with The Jayhawks that hits the Birchmere on October 11th. “I work when I need to, but I don’t have to do anything I don’t really want to do.”

In recent years, Louris has bandied between loving and loathing touring, but has seemed to have found that rare balance where he can still have a life while giving fans what they want: great live Jayhawks performances and more great Jayhawks records.

“It’s true, I got a little burned out from going out on the road, but it’s funny, when you’re on the other side of it, if you work in an office or something, and I say something like, ‘Well, I’m tired of touring like I used to,’ they look at you like you’re crazy. To somebody who doesn’t do it, it represents freedom and this crazy adventure. To me, if I could just be myself on stage, I would play every night because I love playing. It’s where I feel the most comfortable. So we found a way to do touring in chunks and be able to come home and have dogs and things and relationships, like real people. That doesn’t mean we wouldn’t go out for an extended period, if it really made sense. But right now I like going out and playing and then returning to what would be considered a normal kind of life.”

For the most recent Jayhawks’ album, this summer’s excellent Back Roads and Abandoned Motels, the band did something a little different this time around: they recorded versions of songs Louris had already co-written with other artists for their own records, like Jakob Dylan, Natalie Maines, Maines’ Dixie Chicks and others. And the result was another well-received, wonderfully played and marvelously written effort by Louris and his cohorts.

“A lot of the good things that have happened to us over the last few years can be traced back to one person, John Jackson,” said Louris. “He said, ‘I know a lot of people that would love to hear your take on these co-writes.’ He’s become my flag bearer, he’s taking it on himself to be blowing my horn here.”

Over the last 33 years since The Jayhawks started their ride, amidst doing ten of their own records and along with Louris’ multiple personal collaborations, not only did they play behind Johnny Cash many years back, but most recently they were the backup band on Kinks’ leader Ray Davies‘ recent solo records. The two records were steeped in an Americana sound of their own, making it a surprisingly perfect albeit unlikely union with Louris and Company.

“We were in Spain doing a tour and John said, ‘Why don’t you come to London and audition for Ray because he’s looking for a band.’ And when I grew up, The Kinks were my favorite, along with the Beatles, the Stones, the Who, I was a British rock guy. So here we are in the studio with Ray Davies, and it was just a dream come true for me, but also it just seemed like we all hit it off. He wanted a band that had a musical dialogue and a little family kind of situation like we do. So we did a couple of songs from home. He liked it, flew back, and did more. A year later we went back and did the next record. It was a great experience. There still may be some shows with him that may come up.” 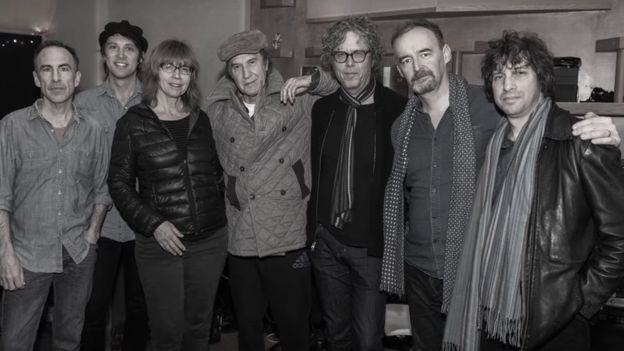 And it’s the unique and unexpected similarities between Louris’ and Davies’ earlier years, literally worlds apart, that even further enhanced this once-in-a-lifetime experience.

“He was very much like me growing up,” Louris continued. “In love with England and the magic of England, British music, the Beatles, Monty Python. But he also grew up watching American westerns and listening to American music, although, he’s really the quintessential Englishman, as far as his writing. But as time went on you certainly can hear in a lot of songs and albums like Musswell Hillbillies where there’s that Americana sound, and this American music sense mixed in with the British thing.”

And as for his always stellar band — currently made up of Marc Perlman, Karen Grotberg, Tim O’Reagan and John Jackson — anyone who knows the music business knows how hard it is to not only stick it out, but to stick it out while you stay both content and productive. Louris is thrilled with the current state of The Jayhawks, and is more excited than ever about what both the present and future holds.