One of music’s most dynamic performers follows her muse no matter what the risk. Oh, to be a Grace Potter fan these days.

Euphoric. Rapturous. Enchanted. Those words come to mind when you describe how the legion of devoted followers of the 32-year-old gorgeous tornado of a musician largely feel about their girl. Forget Taylor, Adele, Beyonce, Gaga…their glittery glorious Grace is da bomb, and they are as passionate and adoring as any fan base community in music right now.

“Going to a Grace Potter concert is so much more than two and half hours of the best live music out right now…it’s an experience,” gushes Jessica Bohn, who is traveling all the way from Buffalo to see Potter in D.C. for all three of her 9:30 Club shows in late January. All in all, she’s seen Potter dozens of times. “I’ve made so many friends, some I consider family, following this band on tour. That’s what keeps me going to show after show after show. It’s like you’re in another world. Euphoria takes over. And my mom raised me on Clapton, Zeppelin, Petty, The Stones, and Fleetwood Mac; to me, Grace is all of them combined and more.”

But along with adoration can come frustration. It’s just part of the deal, part of the ongoing relationship between fans and their idols. In Potter’s case, many like Bohn love her no matter what, but for some, the current air of frustration is two-fold.

For one, there’s a buzz on social media about why she isn’t a bigger star, how she’s got the perfect combo of looks, talent, songwriting chops, plays both guitar and keys, so why isn’t she huge by now? Well for one, rock is way harder to sell to the masses than pop, and up to now Grace has been a rarity: a female rock and roller. But hey, singing the national anthem on NFL’s opening night on national TV, wailing on “Gimme Shelter” with Mick on the Stones current tour, performing for troops in Qatar this month alongside Michelle Obama and Conan, those kinds of high profile appearances in 2015 aren’t anything to scoff at. And along with a solid bank of work in the past and present, it’s clear that her big star is continuing to grow.

But on another level, some fans are grappling hard with why she decided to put her killer rock band The Nocturnals on the shelf for now, veering away from her rock and roll sound to a more pop direction — “what I’m going for is this kind of cosmic boogie thing” — at least for the time being. One comment posted recently was, “I hope she gets back to her roots.”

For Potter, it’s all part of her ongoing growth as a musician, her wanting to test different waters to see how the chips fall. She has no regrets about the track she’s taking, and is relieved to see that many core fans have come along for the ride, a ride that includes her latest effort, the soulful power pop gem, Midnight.

“It’s been one of the greatest gifts of my experience, especially in going solo and really making this shift, to see and experience the fans in a very new way,” the sincere and affable Potter told me from her home in her beloved Vermont, where she was “tucked in, sitting in front of the fire, got a cup of coffee, got my sweatpants on,” all as she enjoyed a holiday rest before resuming her always fierce tour schedule. “To realize that all that devotion wasn’t just because they liked to come and get drunk and listen to a rock band. There are some really genuine connections being made, I feel really connected to my fan base, never more so than with this solo record.”

Grace Evelyn Potter has worked very hard to cement her career into a viable, successful one, so after thirteen years of heavy touring, four solid records (five if you count her very first solo album), and an ecstatic following, Potter decided to listen to her heart and record a different kind of album. Basically, like others before her, she wanted to try on a new sound and see how it fit. And when she first sent the Midnight demos to her cherished Nocturnals as is SOP, the silence was deafening. But after a couple worried weeks, she understood why.

“It was kinda hilarious,” Potter said in her contagiously exuberant way. “I sent out the demos and then a week went by and I’m like, I’m not hearing back from anybody, this is strange. And then two weeks went by, still radio silence. I’m like, OK, listen guys, we have to get in the studio in five days and I haven’t heard from anybody, what the f–k is going on? I think that was the moment I realized, it’s not that they weren’t being supportive, it’s just that they didn’t have anything to contribute. The work was done. The thought was complete. I had what I wanted and they knew it. They knew that this was not a Nocturnals record that they had been hoping to make. Especially after 13 years of being used to having me hand them music that is literally built and catered to everybody having a part, a working part to play. So it definitely was a shift, but I feel like it was an important shift for me personally. And it was really hard to do that, because I did feel like I was taking things away from people that I really cared about.” 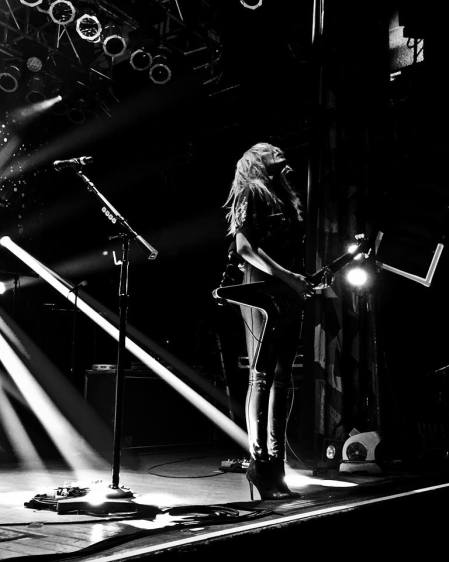 Clearly the absence of more involvement from her bandmates, which include husband Matt Burr on drums, still weighs on Potter. “I always write with a very specific intent to make sure that everybody feels included, make sure that there are parts for everyone. I’ll write guitar solos and I’ll write drum parts and I’ll write bass lines, and make sure that everyone has their moment, you know? That’s kinda just the way I am as a person, too. Like if I’m throwing a dinner party, or sitting in a taxicab, I like to engage people, I like to make them all feel they’re valued and important to me. So yeah, this was hard.”

And along with her band, she fully realizes taking a chance on a new direction was taking a chance with her fans too, that some wouldn’t be too happy about where she was going. Her large Facebook following is rife with some fans lauding the new record while others wish she’d stay rocking and not dwell in poppier waters.

“It’s hard to find your footing in a new context when you know it’s gonna bum people out,” Potter said candidly. “And that there’s a chance that you’re gonna lose. But one of the most exciting and interesting things about this shift has been people coming up to me…one fan kind of whispered it under his breath, he’s like, ‘This is my favorite record you’ve ever made, I listen to it all the time, it’s just so listenable I just can’t help myself!’ Like it was this guilty pleasure, like he was sorry, and that I’m gonna get mad and say something like, ‘Speaking from the Nocturnals man, that is f—ed up! (laughs)’ But it probably is the most challenging thing to do to your fans, to make a shift because you’re being true to your heart, to take a risk and not even know if it’s the only thing you wanna do, but it’s something you’re trying. And to really risk the possibility of losing fans. So that experience of kind of connecting with the fans that feel the most devoted, even when they feel betrayed and they’re angry and they’re sad and they’re scared and they’re like, ‘God what happened to our little Gracie Potter?!,’ all that is part of the experience of being human. It’s really amazing.”

But regardless of the challenges of trying a new direction, Potter remains confident that it was a path she simply had to follow, that there was no choice but to take the risk.

“I was very much surrendering to the muse with this one,” Potter reflected. “And I didn’t try to please anyone else, I just tried to please myself. It was the first time I’ve ever done that as a songwriter, where I’ve really just chased down the idea that I had in my head, regardless of the parameters. There’ve been a lot of times where I want to have it sound like a cohesive community of people making music. This time around, I didn’t feel that urge. I felt the muse was pulling me into a much more specific place. And that was towards complex, hooky melodies. Really straight ahead but awesome, bouncy beats. And just the feeling of fun, and the feeling of an effervescent, buoyant singer. Really just building framework for me to sing to. I don’t think I had ever done that for myself, or allowed myself to go there. So that really was the big shift for this record.”

Potter scoffs at the notion that somehow she is going to become a different kind of artist by experimenting with her sound. To her, there’s no doubt she will always be the same rockin’ Grace Potter that fans have come to know and love, and after talking to her for just half an hour, you can feel that this dynamo will never stray too far from her rock and roll soul.

“You know what, you get it. But a few interviewers, you know, when they first heard that I was going solo, they’re like, ‘Oh, this is gonna be like you with a piano onstage?’ And I’m like, wait, WHAT? Do you know me at all? Have you ever seen one of my shows? This is Grace Potter and the Nocturnals by the way, there’s a reason my name was in front of the band, I’m a f—ing piece of work, I’m a force of nature, I’m a hot mess, I’m a Tasmanian Devil and you can’t contain me. So I’m not sure what part of that is gonna change as a human being from one year to another.”

For most of us, when it all comes down to it, we need to be true to ourselves first. That’s why Grace Potter is so excited about her time spent burning the Midnight oil, because it feels right to her, it’s exactly what she wanted to accomplish, even if it means taking a big chance.

“I’m obviously proud of it, I’m obviously thrilled. But I don’t really care if people like it or not. I love it, you know? See, I’m comfortable in my own skin, I’m very comfortable as a singer and performer. Yet there were some very uncomfortable moments this year just trying to get my head around exactly what I was trying to do. But once I did that, all the other shit is gonna find it’s way. In the end, I can’t tell people how to feel. All I can do is be super honest, and real, and make the best music I possibly can. And I just know there’s something going on right now that has never happened before. It’s really powerful.”