FYI DC: The Artists Behind the Wall Flowers Exhibit The “Wall Flowers: Botanical Murals” exhibit at the U.S. Botanic Garden Conservatory is a first for the living plant museum, which usually features scientific illustrations of plants.

“We wanted to reflect diversity in styles and thoughts and speak to a diverse audience,” said the U.S. Botanic Garden’s Public Affairs and Exhibits Specialist Devin Dotson. “It’s an opportunity to talk about plants in a different way.” The museum decided to go big and bold with oversized graphic art. “When people think of a city, they don’t think of plants necessarily,” yet plants appeared in more than half of the murals around the country that the exhibit team looked at, Dotson said. D.C.’s iconic cherry blossoms pop against a vibrant yellow, orange and green background in”Untitled” by Richmond-based artist Hamilton Glass. He describes the piece as a playful, fun piece highlighting the flower’s life cycle. “I love when they fall off,” said Glass on his flower choice. “My work revolves around a lot of movement and bright colors. What I was trying to portray with that was the movement of the cherry blossoms falling off.”

A book about people’s relationships with plants inspired “Then I Wished That I Could Come Back As A Flower,” D.C. artist Nekisha Durrett said. “‘The Secret Life of Plants’ was just the beginning, the seed if you will, of the conceptual process,” she said. “All plants have meaning beneath the surface.” Durrett said she chose the cotton plant to highlight the “very dark and sorted history underneath the beauty.” Her focus on large-scale art spotlights underrepresentation of figuration and language. “I wanted to make these grand, large statements so that I couldn’t be ignored, because as a black woman, often times I feel like I’m either not heard or not seen,” she explained. “Then I Wished That I Could Come Back As A Flower” by Nekisha Durrett (Photo Courtesy of the U.S. Botanic Garden).

Local plants and people star in “Hybrid Resilience” by Kate DeCiccio. “Painting flowers was outside of my scope of focus,” DeCiccio said. “My mom is an invasive plant material nerd advocating about the importance of hybrid biodiversity, so [she] worked with me to help identify a bunch of interesting local plants.” Interacting with flowers such as bald cypress, sassafras, white oak, loblolly pine, black birch, bristly sarsaparilla are silhouettes based on her photographs of local children.

“Seven Healing Plants” by Gera Lozano features plants across the country with healing powers, including aloe, milkweed and hibiscus. “I love to put a mirror up to your own nature,” she said. “I made sure it wasn’t all about local plants. I wanted flowers from all over the United States.” Lozano, a Brooklyn-based artist who grew up in the Amazon jungle in Peru, said that the piece pays tribute to her mother’s and grandmother’s love of nature and celebrates plants’ healing properties. 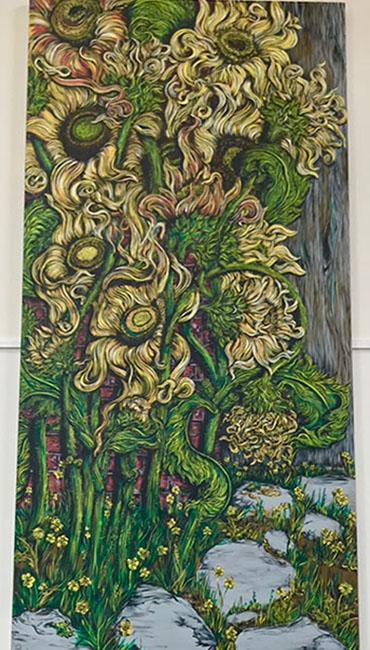 "The Flowers In The Alley" by Kellie Cox (Photo Courtesy of the U.S. Botanic Garden). 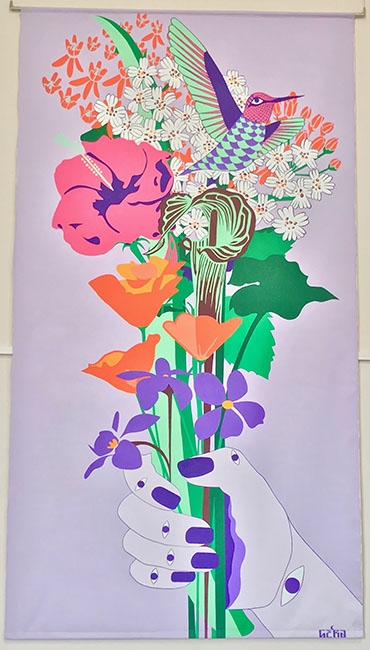 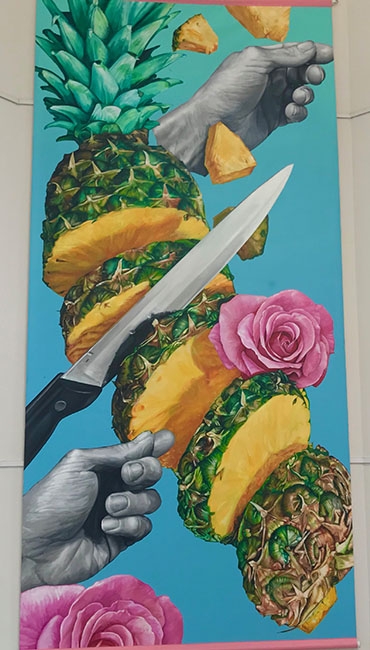 "Empire" by Gaia (Photo Courtesy of the U.S. Botanic Garden).

Gaia, based in Baltimore, Md., created “Empire” featuring a sliced up pineapple and Provence rose. Gaia was listed as a 2015 Forbes 30 Under 30 in Art and Style recipient in Art and Style and was a Fulbright beneficiary to study and paint in New Delhi on behalf of the State Department. He is known for his street art and murals across the world.

Kellie Cox said that she chose sunflowers for “The Flowers In The Alley” – which also includes buttercups and dandelion – because of the plant’s movement, resourcefulness and ability to soak up oil. Large scale murals are not new to Cox, but the size was larger than usual for her. To create this piece, she scaled a ladder to access the canvas, which was propped against the side of her house. Cox also painted the planters on the seats.