A musical treasure looks within as she moves forward. Ricki Lee Jones has been diggin’ in the dirt. Not out in the garden or something like that, no, not that kind of diggin’. Lately, she’s been diggin’ deeply into herself, with a documentary under her belt and an upcoming autobiography on the way.

And for a complicated and contemplative woman like Jones, it’s a delicate process when you’re talking about such intimate details of your life, and as far as the bio, your family history.

“It’s not the writing about myself, because that’s all we really write about anyway,” Jones, 63, told me from home as she prepared for the next leg of her current tour which brings her to DC’s City Winery on September 4th. “For the most part, I’m writing about my grandfather, my father, my mother, long before I get to me. I kinda tried to tell the tale of the family, and that has been a process because there’s some things that would make a great book, but I’m sure the relatives wouldn’t want told. Even though they’re dead, you know?”

Ricki Lee Jones is nothing if not deeply thoughtful, and throughout her career she has always been filled with musical wanderlust, a need for, let’s say, broad-based experimentation. A lot of water has gone under the bridge for Jones since 1979 when she took the music world by storm with by far her biggest hit, “Chuck E’s In Love,” which brought along a Best New Artist Grammy and her picture on the cover of the Rolling Stone, and oh yes, Saturday Night Live giving her an unprecedented three songs on one of their shows.

But since then, even though it may have cost her the consistent and higher level of fame she may have otherwise achieved if she remained the sexy ingenue that “Chuck E” portrayed, Jones has spent her eclectic and exceptional career powerfully expressing her musical feelings and thoughts in her own very unique way, sometimes across many different palettes, because, well, that’s just who she is at her core.

“I was just watching this movie,” Jones said, “and there was a guy in it that said, ‘You take four years to do this, and six years to be famous, and then you gotta spend the rest of your life doing it over and over again’. And that’s the total truth. And there are people who are willing to do that, lets say Stevie Nicks, who will come out and dress the same and sing the same songs, and God bless her. They’ll have that niche and success all their lives. But for people who want to keep changing their music, it’s much harder to maintain a career because people are attracted to you not only at a place in time, but also for a thing that you represent. And if you change that, like a lover, they don’t know what to do and I don’t blame them. You know, but for the so-called more sophisticated audience, here I am. For people who go ‘I’m with you wherever you go.’ David Bowie did it, but he did it with great pop songs. I’m more of an explorer, so everything I make is a little obscure and not really played on the radio.”

Music and performance were woven into the fabric of Jones’ childhood, her grandfather was vaudevillian Peg Leg Jones, and his lasting legacy was the catalyst for Jones’ early, and even future, musical adventures. And perhaps her personal ones as well.

“I didn’t know my grandfather, but the palette of our lives leaned towards music and performance. Whereas for some other families that would be a ridiculous idea, in my family it wasn’t. My father and uncle played together and it was like the music my grandfather played, so maybe he’s here musically. I know that they really respected him, and when they spoke of him and his music, it was with that kind of reverence. My father told me the first time he got excited was when he discovered that I could sing harmony. I remember him sitting with me and he said to my mother,   ‘Did you know she could do this?’ And suddenly, I felt important. So I think it was the fact that my father paid attention to me that influenced me being a singer, more than what he actually taught.”

Life got kinda rough for Jones as she tried to find her way, and she really just wanted to play music, yet she didn’t expect the kind of massive success she had early on, success that would become somewhat elusive later. Does she think that having that that kind of sudden and widespread success early on was a help or a hindrance to her later life and career?

“I can’t say if anything would have been better or different,” Jones said. “Except that it almost makes me believe in God, because it was such a sublime answer to a little kid’s fantasy prayer. Such an impossible thing, like I dream that I’ll stand here in Carnegie Hall and (the dream) says, ‘Okay exactly how you say it…that’s what’s coming.’ And get your hat on because it’s all coming at once, you know? This happiness, this music, this success. Because I seemed to be the lowliest and least likely, I really was, I was a high school dropout, I couldn’t keep a job, they would fire me. And I have a really unusual voice and I was obviously a different kind of a person than what people were buying then. So it was a long shot, but my producers and record companies said, ‘No, this is a songwriter.” I don’t know why, but everybody kind of felt from the very beginning like something great was gonna happen. And then you doubt yourself, because you go, it’s not happening to anybody else and look, everybody else is falling by the wayside and they’re just as talented as me. Why me, and not them? I think that shame and doubt are the worst things that we teach people to feel. So when a wonderful thing is happening to you, you might feel ashamed because it’s not happening to everybody else. So you don’t let it come. It wants to come through somebody, and I was the vessel.” 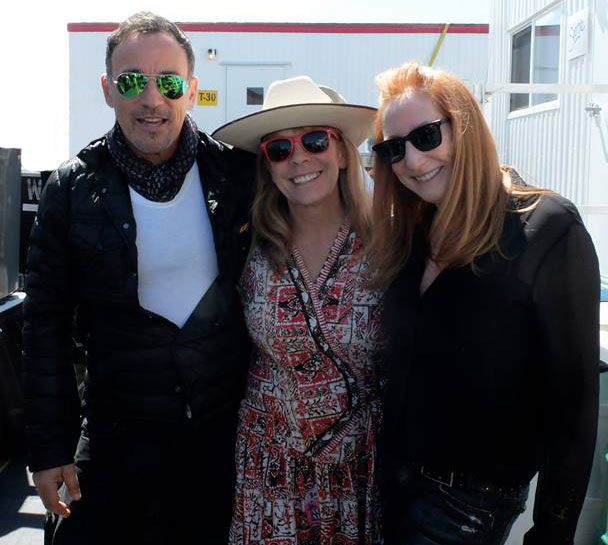 Jazz, electronica, albums of eclectic originals and covers, a Grammy award on a collaboration with Dr. John, life was a musical stew that Jones feasted on as she kept versatile and busy and creative and active in the two decades following “Chuck E.” But in the early 2000’s, while caring for her young daughter, she suffered dreaded writer’s block, and grappled with how to balance both raising a child and sustaining her songwriting passion.

“I think I was consumed with raising a daughter and my personal life made writing less important,” Jones recalled. “And writing demands you, it wants to be with you all the time. Even if you’re not writing, it’s a little person you carry that’s always watching and making jokes with you and keeping your mind active in that way. I just know I hadn’t written in a long time, I didn’t have any ideas, I had no idea how to get back in the door. Except that it’s like a muscle. So, you sit down and write crappy music until you start to write good music. And I think it’s also a sadistic thing I do, because it’s so joyful and wonderful to write music that I would deny it to myself. Also, you have to be in a safe place, where nobody can interrupt the process. But when you have little kids or other stuff going on, it’s not possible. I was a single mother, maybe if there were two of us I could have said I gotta go away. But, I had to look after my child.”

Jones found her way back to songwriting, and then a few years ago, decided that it was time to leave L.A. and seek out another place to find inspiration.

“Leaving LA is both an act of faith and defeat. This is the city that eats you and you’re either one of the eaters or one of the eaten. I just didn’t have anything here and I was sitting in the mire of fury and self-pity that I didn’t have a family of friends. I’ve always been a little bit reclusive but when I was younger, people would come and knock on the door and pull me out. When you get older, nobody knocks on the door. And it’s not my nature to. So I was feeling sorry for myself, and when I went to New Orleans, it was acceptance of my life up to that point. And I think that the acceptance and humbleness that it takes to be, to accept, helps new stuff grow.”

And grow it did. Jones wasn’t a fan of New Orleans when she moved there, but found the much-needed and renewed insight and vision she was seeking, and that’s where she wrote her most recent record, The Other Side Of Desire (2015) which was her first album of original music in over 10 years and received kudos from critics and fans alike.

“I never let my environment be the influence of the music. For me, it’s an internal environment. I could be in the middle of mariachis and I would write. But I decided this time to allow the influences of the music around me to become how I wrote. I actually reached out to it. There’s so many different kinds of music, everybody’s always making music. It’s not like anywhere in the world. When you visit it, for me anyway I would go, ‘Ahh, this hokie Dixieland shit.’ But when you’re there, you see that this music, like, seeps out of the pores of people. Their children and their children’s children. And it’s hard to find that anywhere in America. It feels, suddenly, like you’re in a big family.”

And feeling that connection helped her not only write her latest album, but it also caused her to put out an accompanying documentary about making the record, as well as the current crafting of her autobiography. If anything, Jones has embraced sharing herself, opening up, being honest and even self-effacing, about how she writes and how she feels as she enters her sixties, with the millions who still adore her and have stayed with her from Chuck E to now.

“I have to be honest and critical that I think I’ve been at a three-quarter place for a long time. I’ve written three quarters of a good song for a long time. I’m a great starter, good melodies, beautiful bridge, but what’s the point of the song. And I think that’s been a reflection of my life for a long time. Like what is the point. And do I dare interject a point in, when I don’t really have a point. So I would say that you know that I’m more critically pressed than I need to be. But I’m hoping that I’ve finally grown to the place that I will go ahead and tell the whole story musically, as well as physically.”

There’s an App for That: Grocery Shopping that Makes Cents