A revolutionary master of his craft brings his own unique sound to a traditional musical genre. When you hear the name Ottmar Liebert, some people who don’t know any better might think you were talking about a famous German scientist, or maybe a champion skier, or even a specially brewed German beer. “Yeah, I’ll take a pint of that Liebert, please.”

Well, those people would be dead wrong.

If you don’t know who Ottmar Liebert is, you’re not only missing something very special, and have been for decades, but judging by his record sales and worldwide popularity, you’re also in the minority. Liebert is one incredibly rare talent and a masterful revolutionizer of a traditional sound, a sound generated by what he holds in his two hands.

You see, Liebert plays flamenco guitar, it’s the core of his sound, but it’s definitely not the flamenco guitar you may be used to hearing. His is a style he largely created, that builds on the intricacies of the genre, but also bends the rules and reinvents them.

“I think if you listen to even in the first album, Nouveau Flamenco, there was something that was different from what you would hear from traditional flamenco,” Liebert said in the midst of an East Coast tour that brings him to the Birchmere on Sunday October 21st. “And that is that almost every song had a very clear, like, here is the verse and here comes the chorus. That’s a thing that people didn’t really much do before then, I don’t think, with this type of music. Now you can hear it much more.”

Liebert founded the first incarnation of his band Luna Negra (black moon) in the late 80’s, and his first, self-produced album titled Marita: Shadows and Storms was only sold in the gallery of a local Santa Fe artist. But when the record found its way to radio stations and began generating a buzz, a record company picked it up and released a remastered version titled Nouveau Flamenco (1990). The album eventually sold double-platinum in the United States, and would change the face of flamenco music, and launch Liebert’s career to new heights. This new take on an old sound pleased many, but at first, it didn’t please one of Liebert’s heroes, the legendary flamenco player Paco De Lucia who described Liebert’s take on flamenco as “una degeneración, una caricatura del flamenco” (“a degeneration, a caricature”). But then, like so many other musicians, it seemed that Lucia came around to also appreciate the mastery of this new and revolutionary sound.

“First of all, there’s a lot of what I did that had an influence on the music that is being made in Spain,” Liebert, 59, said. “So I would definitely think you can hear some of the things that I’ve pioneered are being used there, and that’s as it should be. That’s how we get better. We all listen to stuff and go, ‘Oh, wow, that’s a great idea. I could do something different with that.’ The second thing is that it was kind of hilarious that after Paco expressed that he wasn’t impressed with me, his record company put out promotional material that said, ‘After the popularization of flamenco by Ottmar Liebert, we now present you Paco.’ Maybe he didn’t know about it. But I think he was an amazing guitar player. He lived the lives of three other people, basically. It was so rich in invention. But I think when you’ve made that much amazing music and you go through a bullfight arena in Spain and they play (my) ‘Barcelona Nights’ or you’re watching something on news and they’re playing something from Nouveau Flamenco, yeah, of course that would get you a little upset.”

Liebert holds up guitar legends like John McLaughlin, Robert Fripp, and his own personal favorite Jeff Beck very high as his biggest influences, but had a stunning up close and personal experience with another one of his heroes, Carlos Santana, one he still likely smiles widely about when recalling.

“When you listen to some of the way I treat melody, it probably has to do with how much listening to Santana I did when I was a kid, too. My first experience was seeing him when I was 15 or 16, it was the first concert I ever went to, and it was Carlos Santana in Cologne, and the opening act was somebody we had never heard of, but who are just as famous, Earth, Wind & Fire. And then to record with him in ’92, I was able to reach out to him through the people at the record company we both recorded for, and he agreed to play on the record.  That was pretty amazing, we did one of my songs, ‘Reaching Out To You,’ and then we also did his ‘Samba Pa Ti.’ And then to tour with him for three months in ’96, that was … I had to pinch myself.  We ended up opening for him for about three or four months, and so we would play for about 40 minutes, then he would play a few songs, and then we’d go up and for about half an hour and we would play ‘Samba Pa Ti’ together, and then a few things he wanted to play, like the “Concerto de Aranjuez” and get a jam going with that, and a few other things. Yeah, it was amazing for a kid that definitely adored him to be on stage and play with him.” 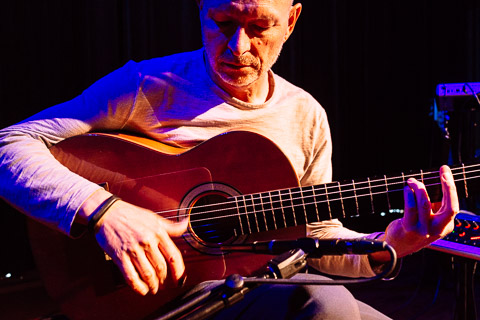 Liebert not only plays his brand of flamenco-tinged music with flair, skill and inventiveness, but he appreciates the deep and unique history behind flamenco music as well.

“Here’s the important thing that most people don’t realize, that all these traditions that seem so unique and unified, whether it’s jazz or flamenco, are really the result of a whole bunch of different things running into each other like marbles that hit each other. Most people know that flamenco’s Spanish, but they don’t know that probably something like 60% of traditional flamenco is Arabic. When you hear them singing and flattening the final note, that’s a very Arabic thing to do. I’d say at least 60% of flamenco. Why does flamenco sound that way and not like the gypsy music in Spain or the gypsy music in the Balkans? It’s because of the Arabic culture that was there for, what, 600 years? Then you’ve got the tangos, flamenco, and rumba, and that all came from the Caribbean, so if you took all of that away, what would you have? You’d have some folk dances, some Sevillanas and a few other things like that, but you wouldn’t have this richness that comes out of combining it.

And sometimes at his shows today, when he plays in more red-state places where there is still some stereotyping of the Arabic people, he first encounters a surprising reaction, that often turns into a learning experience for some in attendance.

“It’s funny, because sometimes I talk about that, how flamenco is a mix of things, and if you’re in a very conservative area, sometimes people gasp, like, ‘Oh, my god, I did not know that I would be shown Arabic things here.’ You know what I mean? Because people don’t realize it. But I think sometimes I’m doing them a service, because they’re suddenly looking at things just a little bit differently.”

Halcyon Arts Lab brings the Future to the Present