Mickey Hart has got rhythm.

Of course anyone who knows anything about rock music knows that. I mean, as drummer and percussionist extraordinaire for the Grateful Dead for over 50 years, or during his exceptional solo career, Hart’s world has been born, bred and based on rhythm. Whether it’s navigating for decades the many miraculous and often complex sides of the Dead – like Jerry’s guitar, Phil’s bass, his comrade Bill’s drumming – or creating Grammy-winning forays into world music like Planet Drum, Hart’s musical life has always consisted primarily of exploring and experimenting with a staggering array of different sounds, vibrations, reverberations, and yes…rhythms.

So it makes a ton of sense that 15 or 20 years ago, Hart would transition rather seamlessly into the world of art, harnessing some of those thousands of exploratory and rhythmic experiences he’s had (and continues to have), and translating them into a visual medium that seems to be a perfect representation of who and what he is all about. All of this is vividly evidenced in his latest exhibit The Art of Mickey Hart, which includes stops this Friday, March 22nd  from 7– 9pm at Wentworth Gallery, Westfield Montgomery Mall, and Saturday March 23rd also from 7–9pm at Wentworth Gallery, Tysons Galleria. 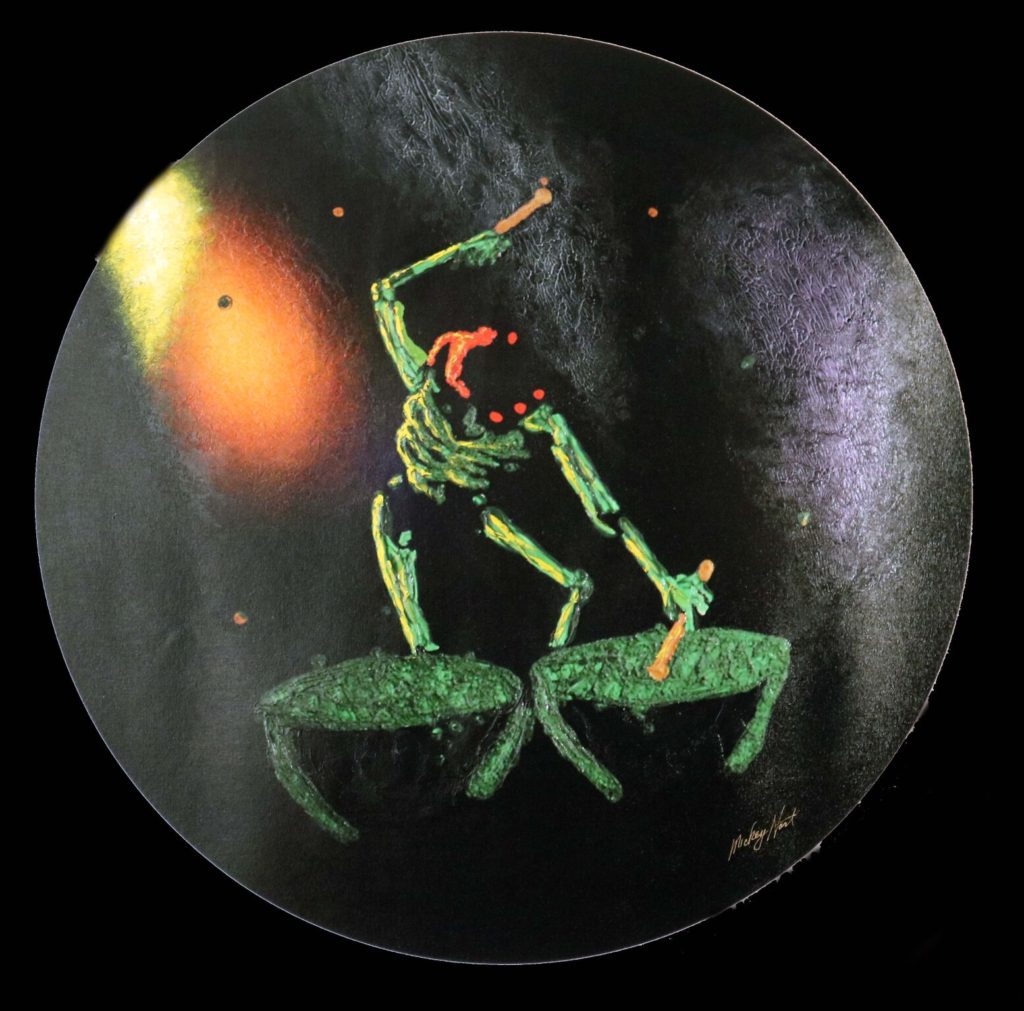 So when you ask a guy like Mickey Hart what makes him happiest these days, it’s not just one single thing, but a combination of these many dimensions of his life that keep him fulfilled and content. “Besides my family, which is amazing, it’s the art makes me happy, and yes, the sounds that I make, and the images I make,” the 75 year-old told me during a break from his latest run with Dead & Company, as he embarks on his brief art tour. “In that sphere of things, I feel very warm, it all feels very warm and friendly, and I’m very happy, and feel very fulfilled. And I become still, and I find my center, I become whole.” Hart says. “That’s the thing about art. That’s what art gives, that’s what art is supposed to say. And so when someone looks at the art, you want to feel a sense of contentment, happiness, enlightenment.”

For Hart, his musical acumen and rhythmic mind seem to mesh and become a conduit for how he conceptualizes and creates his paintings.

“When I paint, I can freeze the rhythm, and right there, there’s the life force in action. It’s a dynamic moment. It’s frozen into the static image. And also, in my painting, I vibrate these images into life, as I vibrate them, and as I drum on them, on their frames until the image, until the proper image appears.” Hart uses a pouring medium which does not necessitate a brush.

What makes Hart’s captivating art adventures even more of a perfect match is an element that falls directly in line with the core appeal of the Grateful Dead: improvisation.

“The instrument that I paint on is called Rainbow, and without Rainbow, I couldn’t do this. Whether it be canvas, wood, plexiglass, or anything I put on it, Rainbow takes these and can turn it in any kind of shape, any kind of angle, and spin it, and do all those things,” Hart says. “Rainbow and I have an adventure, just like I do in the Grateful Dead actually. It’s improvisation, total improvisation. You can’t improvise if you don’t have skill. You have to have the skill, the language of the paints, which took a long time.” 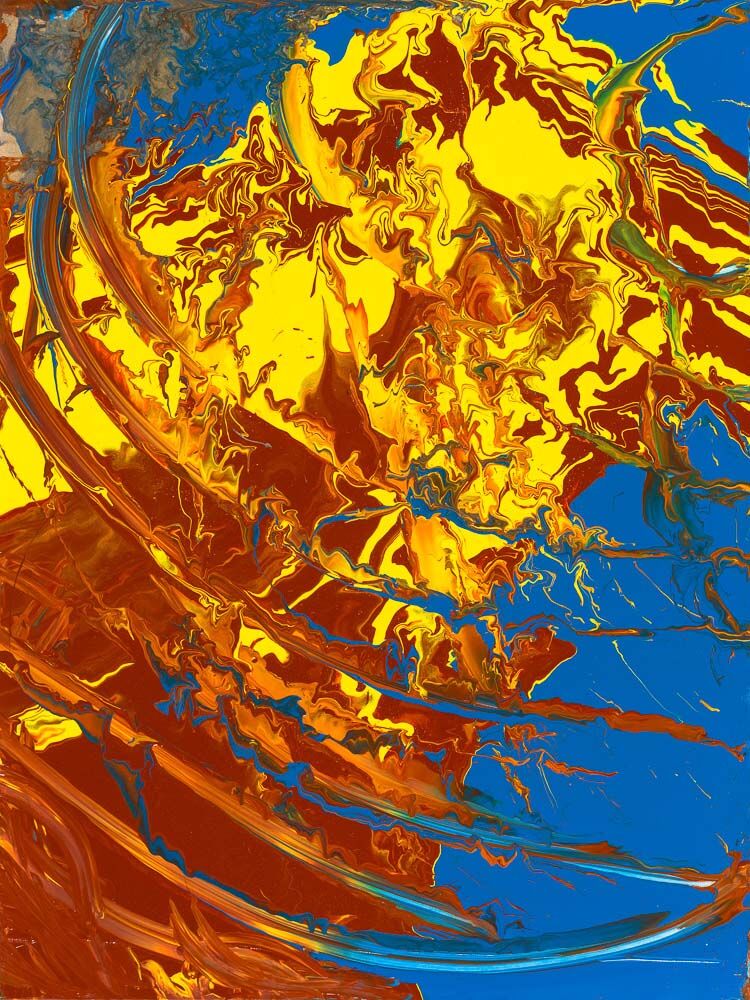 “It’s really the vibration,” Hart continues. “It’s really the rhythm of the whole thing, of me vibrating them into existence. They’re all about detail and rhythm. If you look at them, they all flow. There’s really not many beginnings and endings. They all kind of go together but they all can be singular images as well.”

Hart’s art interests had humble beginnings, as humble as you can get actually, given he found his first motivation rather unintentionally in a toy store shopping with his six year-old daughter. On the way out a painting kit of gouache (gum-based arabic) caught his eye. His daughter found little interest in the paint, but he dove right in. “I just fell in love with the paint itself and I started painting more and more. Then I eventually, somehow, and to be honest with you I can’t remember how, I slipped into the pouring medium. I just did it one night,” he explains. “I had no idea what I was doing for a long time and it was a lot of fun because for years I knew nothing. I was throwing sand, and totally unorthodox. I’d go over there, smoke a doobie, have a glass of wine, some wine and a little good smoke, and I went at it for years. And then slowly I learned the language of the paints over time. And one night I poured stuff and it started from there.”

When he’s not on the road with Dead & Company or on his own music or art tour, Hart has his routine, and it’s one that feeds and sustains both of his passions.

“It’s all about the sound of the music in my mind. I’m doing drums now, and I’m doing so many different kinds of music. All day I play, every day, unless I’m with my wife. But every day I’m in the sound. And then I paint from time to time during the week and maybe on the weekends. So it’s always after I play all day, I do this at night. It’s a night thing for me. And the synergy runs through it, I enjoy my synesthesia very much, and everybody should enjoy their synesthesia. When you get the ears, and the eyes, and the mind, and the touch, the smell, the sound, when all that comes together then you just ring the bell.” 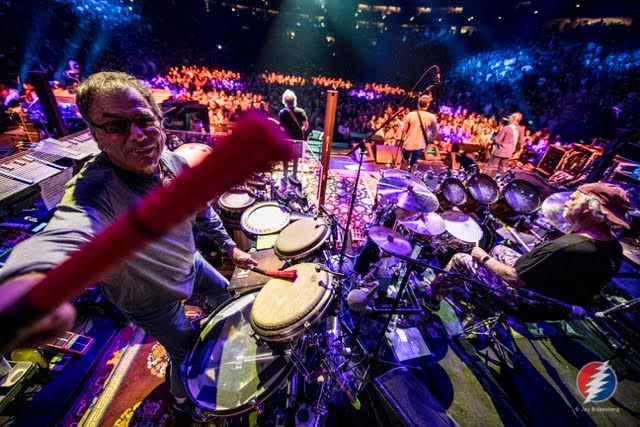 And amidst the thrill of his relatively new found talent as an artist, Hart still remains in awe that the magic of the Grateful Dead continues to exist as big as ever 50 plus years after it all started.

“They won’t let it go and we won’t let it go. You guys keep following us. Who are these people? Why are they following us? It’s really wonderful,” Hart says. “We actually finally, I think, have learned how to play our instruments. And we have a great band. It takes a long time to have a great band. John is fitting in so beautifully, all the new guys, and again, the synergy. There you go. Now we’re talking about band head, we’re talking about group mind. So yeah, it’s great to be doing it still. Music is like that. You can do it for your whole life if you stay fit, healthy.”

“Over the years, just like anything else, your enthusiasm might wane, and then all of a sudden something happens, and it brings it all back, and it stays for a while. Well, in our case it’s been there for quite a while now. Everything’s been really good and smooth. There’ve been no hiccups. It’s a fucking miracle. It is, even for us. We can’t believe it either. It’s a miracle if you believe in miracles. We shouldn’t be here.”

Mickey Hart is a grateful man, grateful that he has been able to sustain not only his musical life, but he has also become immersed in a whole new and exciting place, his art. For Hart, it’s all about moments.

“Every moment counts. And that’s why we play music that is in the moment, moment music, and that’s what the painting does. It brings you into the moment. And you know Steve, nothing makes you feel better than being in a moment.”

The Dish: Burgers That Stack Up