The leader of the 80’s rock giant talks past and present as his band tours North America for the first time in 20 years. Maybe Jim Kerr had a simple mind right from the start.

As in knowing from the get go, it’s simple, right here in little Toryglen, Scotland, it’s a simple choice, this music thing.

I mean, Kerr was barely a ‘tween when the mother of his best friend, Charlie Burchill, co-founder and still lead guitarist of their still-world famous band Simple Minds, bought him a guitar. There are crystallizing moments, when it all becomes clear. And to Kerr, this was a biggie.

“He lived on the same street, so Charlie and I have known each other since we were eight,” said the affable Kerr, as he and his 40-year-old band embark on their first North American tour in two decades, with an East Coast swing through some of rock’s best known venues like The Beacon in New York, The Orpheum in Boston, the Tower near Philly, even the hallowed Ryman in Nashville, and a stop this Saturday at the 930 Club in DC.

“I think that the key thing was that at the age of about 11, his mother got him a cheap Spanish guitar. And I remember the day he got that, because there were very few people with guitars, so he had it out in the street, and we’re all standing around and such. And two weeks later, he could play all the stuff we loved, T-Rex and Bowie, and all that. And in all seriousness, if Charlie’s mom hadn’t got him that, I think we would be both driving taxis.”

Kerr’s serious, dead serious about not only that story, but also about the dedication he has shown during his prolific 41 year career. A career that has taken him and his band from iconic 80’s rock song makers (you know how The Breakfast Club starts, right?) five #1 UK records and stadium shows, through a brief band slowdown and reshuffle, and now, Jim and Charlie, those little boys from Toryglen, are back to selling out venues across the world with that special brand of rock only a few bands have been able to carry on doing this long, one being those four guys from Ireland that Simple Minds was often compared to back in the day. But it all began in that little Scottish town with Kerr and his best buddy, a guy who’s been by his side for the whole ride.

“That was the start of our infatuation,” Kerr said. “Everyone was starting to discover music, and go to gigs and all that. But he was a guy that actually could play the stuff, and before we knew it, he and I were trying to write little songs. And that really is the embryo right there. We’ve been rewarded in so many ways beyond our dreams. But for me the biggest reward has been the friendship with Charlie and still is. I mean we kill each other as well. We slaughter each other. But we’re best pals, and in fact I’m going to have a fight with him later today. I know there’s one coming.”

Simple Minds could have become just another 80’s rock casualty, there sure were enough of them. But instead, they seemed to have timed their resurgence just right, and it wasn’t an accident. They seemed to know when to return, and how best to do it. And as their true fans have remained loyal, Kerr feels it big-time.

“We’re so glad about it, we feel that goodwill. Usually when people like our band, they love our band. There’s very little in-between, and God are we lucky to have that. Perhaps absence does make the heart grow fonder as well in a sense. Perhaps the fact that we haven’t been in everyone’s faces nonstop, perhaps that comes to factor in as well. But either way, we love all the support we get and the fact that the people still listen to the music.”

Over the course of Simple Minds’ long history, they had one main goal, to be a great live band. I mean, doesn’t every band strive for that? But not every band can deliver, yet through the years, Kerr, Burchill and company have been able to maintain the live concert dynamic, one that they are still striving to hit every night.

“I think if you had said to us when we started out, what do you want to get out of this — yes we were young, we were naïve, we were green, the world was much more naïve then in terms of music business — but I am pretty sure we would have said to you, we want to be in a great live band. And we want to take it around the world. They were the two things that were important to us, ’cause we grew up watching great live bands. Old enough just to be in a band, in a live band. And we wanted to be in a great live band. And here we are four decades later, still getting the opportunity to deal with our challenge. And that’s what we wanted from life. So in that sense, we’ve won the lotto, because essentially that’s all we ever wanted. Everything else was extra.”

Kerr and Simple Minds released their most recent record War Between Worlds this past spring, and for Kerr, it was not only a chance to get the band back recording again, but it felt like the momentum was back and of course, a tour, their wheelhouse, would be just around the corner.

“The records, they’re never easy, but there are some records you make, where everything just rolls and it all sounds good coming out of the speaker. Other records you make and you’ve kind of got to wrestle it to the ground. But this one, it was sounding good. It just sounded like the right thing at the right time. And any time anyone walked in the room within seconds, they were going, that sounds pretty good. That sounds good. So we kind of felt that we had the wind at our back with that one and that was good fortune.” 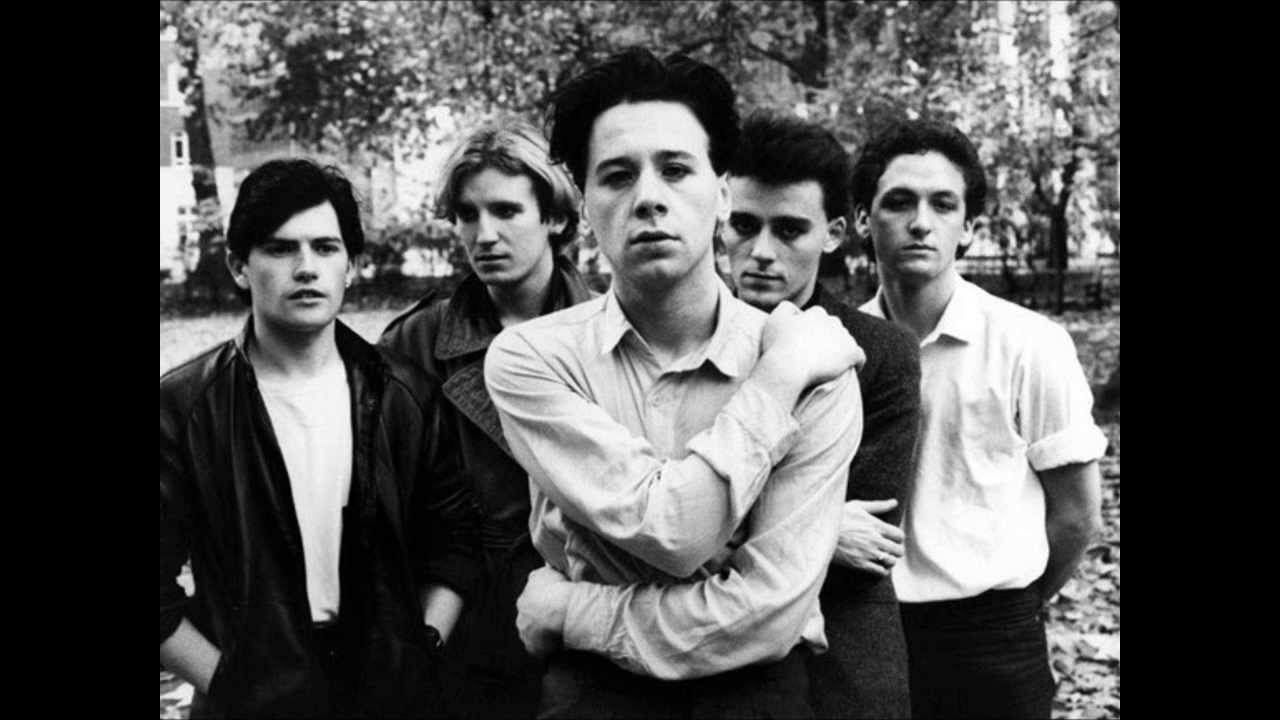 Simple Minds circa the 80’s, with Charlie Burchill (far left) and Jim Kerr (center) and their band.

And does it bother him to have to roll “Don’t You Forget About Me,” “Alive and Kicking” or any of the other oft-played 80’s anthems Simple Minds was so well known for? Not at all says Kerr, they were important songs to the band and their audience, and were even fun surprises being such huge successes. And really, it’s just part of the gig.

“We never ever had regrets [having to play them]. We sometimes shook our head at the way things worked out. We couldn’t…like where did that come from? But it transcends generations even, even other generations buy into it. It’s a real cultural thing. Now when you’re on stage, you’re there to be of service, and to be of service you’ve got to give 100 percent regardless. When we’re on stage, we’re not doing it for ourselves. We wanted to do it for ourselves, we would stay in the garage, and we probably wouldn’t play that. We would play something else. But when we’re out there, we’re there to be of service, and you wouldn’t want to disappoint anyone.”

So for Jim Kerr, lifelong best friend Charlie Burchill and their superbly talented Simple Minds bandmates Sarah Brown, Cherisse Osei, Ged Grimes and Gordy Goudie, things are pretty much alive and kicking again four decades after Kerr and his pal’s first run at fame. And no, their fans surely haven’t forgotten about them.

“You know what I mean, it’s all coming along good. And most importantly we’re getting the chance to get out and essentially prove ourselves again. And loving every minute.”

Simple Minds’ show this Saturday October 6th at 930 Club is sold out.