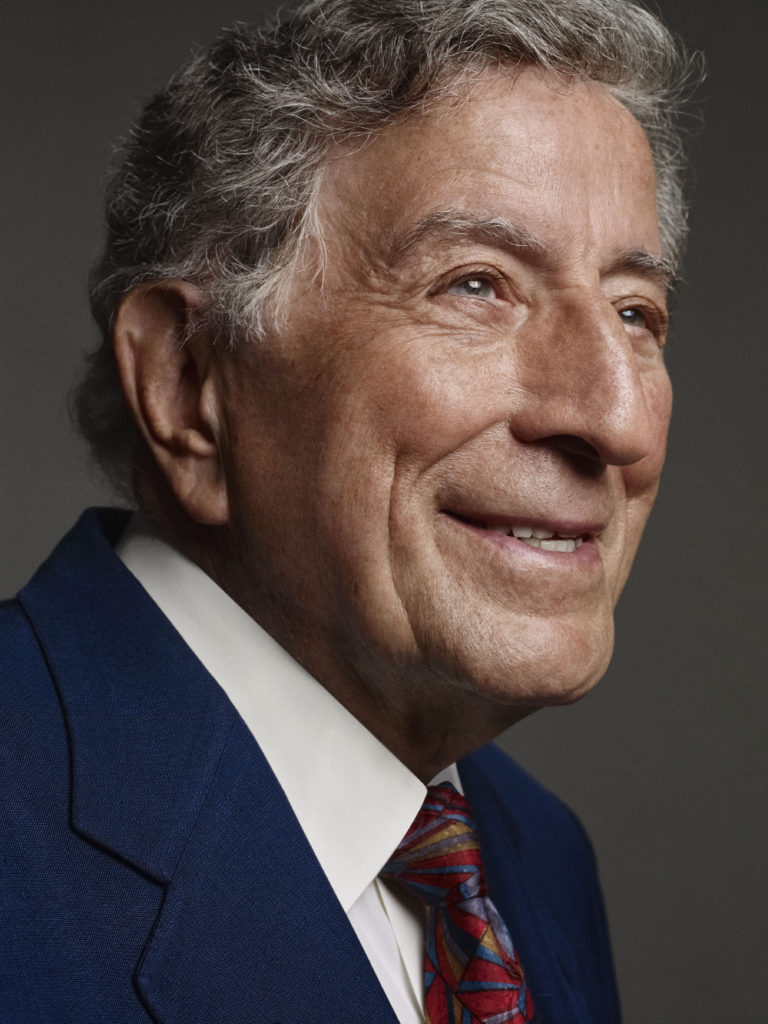 Now considering this happened while he was in his eighties and early nineties, it is a stupendously monumental feat from a record sales perspective. Pretty much unheard of actually, selling those kinds of numbers during your eighth decade, and into your ninth, on earth.

But much more than the record sales, it clearly illustrates the high level of deep adoration and widely swathed respect and admiration that Bennett still globally commands so many years after he humbly began his unprecedented journey on the planet as Anthony Dominick Benedetto, singing to fortunate diners while waiting tables in Astoria, Queens, followed by hunkering down in bunkers while dodging German bullets as an infantryman in World War II, and then returning from the war of all wars to develop, nurture and evolve into one of the greatest singers of all time.

So how has this kind and thoughtful legend remained so relevant, so appreciated and so beloved for all this time?

“I appreciate you saying that,” Bennett, 93, told me as he continues his summer tour which makes a stop at Wolf Trap on August 17th, where last year his friend and duet partner Lady Gaga stunned the crowd with a surprise cameo. “When I first started out as a young pup at Columbia Records, my premise was always to not race after ‘hit records’ that were often novelty songs that would hit it big for a few weeks and then fade away, but to develop a ‘hit catalog.’ And I was taught by my mother to respect quality, and that is what I have always tried to strive for in my recordings. It’s also about choosing the best songs from the Great American Songbook, and getting the best musicians to play on them, and to create definitive versions that would remain timeless and communicate to audiences throughout the years.”

And oh-so monumentally timeless Mr. Bennett remains. These days, just the mere mention of his name still reflexively elicits a wide smile, a contentment-soaked sigh, or a “He was my Mom’s very favorite” type of response, as well as a visceral need to Google his first big hit “Rags To Riches,” or probably his best known song “I Left My Heart in San Francisco” or any one of his dozens of classic, enduring songs, and sit back, close your eyes and bask in his immortal sound, whether you’re 23 or 83.

In addition to being bestowed with some of the most recognizably silky and memorable pipes in music history, Bennett’s priceless combination of good genes and undying family support resoundingly contributed more than just about anything else to his many decades of ongoing, unparalleled success

“I grew up during the Depression,” said the quietly affable Bennett. “So my parents focused on earning a living and supporting the family. But my father, before he immigrated to America, used to sing at the top of a mountain overlooking the valley where he grew up in the Calabria region of Italy, and his voice was so strong that the whole village could hear him sing. My brother John was a young operatic singer and was called the ‘Little Caruso’ and performed at the Met, but he didn’t pursue a career in entertainment.”

“But every Sunday, when I was a kid,” Bennett continued, “our family would gather at our home, by then my mom was widowed and raising three children on her own, as my father passed away when I was 10. We would have a big Italian meal, and then they would gather in a circle and my brother, sister and I would perform for them. It was the encouragement that I got from my family during those Sundays that inspired me to become a performer, so yes, there have been many influences throughout my life for my artistic path.”

After years of early success, many artists like Bennett felt a bit of a career wane as MTV hit the airwaves, as technology began to overtake the music industry, and as that famous pop-standard style took a momentary backseat in popularity. But it was both the impetus of his son and Bennett’s willingness to adapt to the changing musical environment that would serve to propel him into a new arena of fame, one that glowingly resounds to this day.

“At that time, my son Danny told me to check out MTV,” Bennett described, “and I liked the idea that each song was being presented as a mini-movie. So when we got together with them and they asked if I would do an MTV Unplugged session, my response was, ‘Of course, I have always been unplugged!’ So that started the whole approach, and we were fortunate that this was all going on at the same time that Walkmans and then iPods hit big, and kids were finding their own music on the internet so they weren’t tied to just listening to what radio stations were playing – they were exploring all kinds of music. Now those kids are parents and grandparents, which is amazing to me.”

And it was a chance meetup Bennett had with two fans that reinforced not only the positive move to jump on board with the changing times, but also illustrated the wonder and glory of generations bonding through his music.

“I think one of the most memorable moments from that time was backstage when a father and his son came to say hello. The son told me that his discovery of my music and his love for it was the first thing that he had in common with his father in a long time. So overall, that period of time was all done with care and proper involvement with other artists, so it was a very authentic and natural progression of events.”

In addition to his perpetually successful musical talent, Bennett is also well-known as an artist, and has been happily creating beauty with pencil and paintbrush since the time he was known as Antonio. Thankfully for the millions of fans he has worldwide, the musical Tony overtook the artist Tony as far as his main vocation, but into his nineties, Bennett has continued his art life in tandem with his musical one, to much success. And he has another musical legend to thank for encouraging him to keep up with his art while also honing his singing career.

“I have been sketching and painting for as long as I have been singing,” Bennett said with a likely smile. “There was a time when I was in school that I told my music teacher that I was thinking of giving up singing and just concentrating on art.  Fortunately, he told me that he thought I had something worth developing with my singing and to stick with it. Nonetheless, I continued to paint and sketch, but it was Duke Ellington who encouraged me to take my art seriously, he told me that it was better to have two creative outlets instead of just one as you never got burned out, and he was absolutely right.  And today, I honestly cannot believe that one of my most favorite paintings I have ever done, a portrait of Duke, is now in the National Portrait Gallery in Washington DC!”

As he journeys through his ninth decade, painting glorious pictures and singing breathtakingly to sold out crowds worldwide, all while a whole new generation discovers his imperishable talent and innately comforting voice, Tony Bennett is happy, and retains an optimistic and positive attitude about life, one that many of his fans could no doubt learn alot by adopting.

“I try to always stay positive, and not dwell on the negativity as that just causes stress which I have learned is a detrimental to your well being. I truly believe that life is a gift, and every day is an opportunity to learn something new or just appreciate being alive. So whether it’s enjoying nature by taking a stroll in Central Park in NYC, or having a great meal –  really, the simplest of things make me very happy.  I just turned 93 and I feel great, and like I am just getting started.”